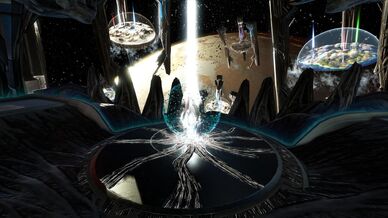 The Overseer Arena is an arena for fighting the final boss of The Island, the

Overseer. The Arena is -28 °C or -18 °F. Powered Tek Armor and Fria Curry Is Highly Recommended!

The Overseer Arena is situated at the end of a space station above The Island, and can be reached from the Tek Cave. Through the window you can see the remains of Earth, where Extinction takes place. Other ARKs dot the horizon as you fight the boss. A partially destroyed ARK, presumed to be Aberration, is also visible.

Important note: The overseer will spawn white colored unless you first open the tek cave with the corresponding tribute terminals.

All Non aquatic, non-flying Creatures that can enter the Tek Cave can enter this arena, excluding the following: