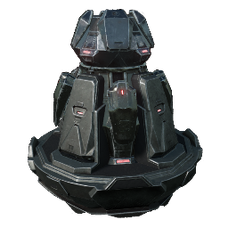 La cápsula orbital de suministros (comúnmente abreviada como OSD, de la versión original en inglés Orbital Supply Drop) es una estructura temporal de suministro de objetos actualmente solo disponible en la expansión "Extincion" de ARK: Survival Evolved. It replaces the Supply Crates and Deep Sea Loot Crates of the previous maps. Different than the former loot drops, they can and will be damaged by waves of Corrupted Creatures spawning around the Supply Drop. To secure the valuable contents of the Orbital Supply Drop, the survivor must fight off waves of corrupted enemies, the amount of which varies depending on the level of the drop.

The Orbital Supply Drops occasionally fall from the sky and land in various areas in the Wasteland outside the city on Extinction. There are 4 different types of OSDs, each one varying in difficulty, health, and potential rewards.

An OSD defense mission is initiated by simply approaching it, which will cause a force-field to spawn around it, beginning the first wave. This force-field will protect the OSD from the waves of corrupted creatures, but will shrink as it absorbs damage. Once it is destroyed, it cannot be brought back, and the OSD will become susceptible to damage. Alternatively, the player can choose to prematurely deactivate the shield if they wish by walking up to the OSD and choosing the "deactivate shield" option. However, keep in mind that deactivating the shield is an irreversible option and it cannot be brought back once it has been turned off.

Once the defense mission has been initiated, the OSD can be approached at any point (or looked at with a Spyglass) to see its remaining health, what wave is currently active, how many waves until the defense mission is complete, and how many hostiles are remaining in the current wave. Once all the enemies in a wave are killed, the next wave will begin after a few seconds, signified by a musical cue.

Once all the waves are completed, a musical cue will play and the message "OSD defense complete!" will appear to all nearby players. At this point, the player may simply walk up to the OSD and select the new "Eject Items" option to receive their rewards. Keep in mind that the items are dispensed directly onto the floor, so be sure to pick everything up before they de-spawn. The OSD itself will disappear a few seconds after all of its items have been dispensed.

If the player fails an OSD defense mission, the OSD will be destroyed, disappearing in a similar fashion to the supply crates on the other maps and blasting back all nearby entities. This blast does not cause damage, but can potentially cause fall damage if you are blasted off a ledge. Additionally, if the OSD is allowed to unrender,(all players leave the area) the defense mission will be terminated, causing the OSD and the wave of enemies to disappear. If you plan on doing an OSD defense mission solo, be sure to bring everything you need with you to the fight so this can be avoided.

Blue, Yellow, and Red OSDs require 6 waves to complete, consisting of a preliminary "wave 0" and followed by 5 normal waves. Purple OSDs (the hardest difficulty) require 8 waves (0-7) to complete. However, the player can continue to keep going after wave 7 to increase the quality and quantity of the loot. This quality increase will scale up until wave 14 is reached, after which it will no longer increase. Purple OSDs have a longer "grace period" between waves to allow players to dismount and select the "End OSD defense" should they choose to do so.

These Corrupted Creatures can spawn in each wave with varying number.

Note: Drop health starts at 100,000 HP. Be well aware that the further the wave progress, the more powerful the

Corrupted Creatures will appear as well.