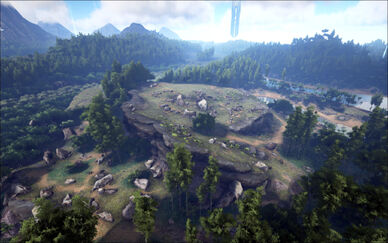 Weathertop is a small plateau on The Footpaw island in the south of The Island, comprised of a boulder-strewn grassland with small trees and bushes. It is surrounded on most sides by cliffs, which can present a fall hazard to explorers if not careful. However its limited access by land makes it a relatively defensible space for survivors to build, as the three paths to Weathertop can be walled off and it can be fairly easily cleared of its low- to mid-level predators, providing a large space for communities. Most of the trees on weathertop are small, making wood-gathering excursions into the surrounding Footpaw necessary. There are no water sources on Weathertop, but water tanks can be built to store rainwater.

The Weathertop is in the central region of The Footpaw. There are three paths to access it from The Footpaw, and these paths give access to different types of areas. In the north is another large, flat area with forests and access to the Swamp Biome, while the east and south provide access to rivers, beaches, an inlet usually rich in Trilobites and fish, and forests for collecting wood and thatch. To the west the Red Obelisk is only a few minutes' travel away by boat or foot. Weathertop is well-located, providing a safe haven with good access to the ocean on the south coast and one of the shortest and most direct paths to the Writhing Swamps and The Redwood Forests to the north and the Southern Islets to the east.