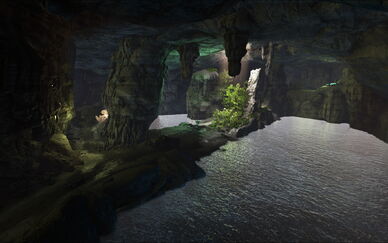 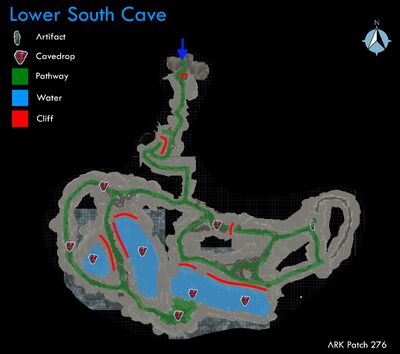 This cave is in the south-central part of the Island, just north of the Sandy Cove, and can easily be reached on foot from the western bank of the river just west of the cove. Begin your trek at approximately (81.2, 49.5) and head east into the small ravine. Cave entrance is in the right cliff wall, a few hundred meters from the beach.

The Lower South Cave is one of the easiest caves on the island, though it is still more dangerous than anything in the nearby surface environment. It houses the Artifact of the Hunter. Multiple creatures will slow and tranquilize the survivor as they swarm to the fight, and narrow, twisty passages and sudden drop-offs into crowds of creatures.

The equipment recommendations below are likely sufficient for a single trip through the cave, without carting out all of the metal, obsidian, and crystal. If you plan on looting the cave completely (or returning often), you may want to bring supplies to build a

Smithy within the cave to repair armor.

The cave contains limited quantities of plants for

Fiber and various berries, but no trees (so no Wood or Thatch). You will be able to harvest mass quantities of

Raw Fish Meat while in the cave, so a

Campfire can be handy to replenish food supplies.