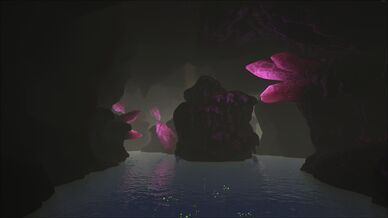 Esta enorme cueva está al sur del mapa. Similar to the Dragonmalte Trench, the Wyvern Cave is a natural spawn for Wyvern Eggs (excluding Ice Wyvern eggs). The terrain is varied enough to prevent survivors from easily traversing it, and the lighting is dark; however, this makes it easy to spot eggs.There is also a very high amount of Crystal on most surfaces.

The cave is above water, behind a rock, and a waterfall. To enter, survivors will need either a flying mount, preferably with high speed and stamina to get away from tailing wyverns, or a mount capable of swimming in.