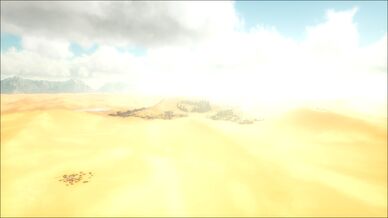 The Southern West Dunes is a region in Scorched Earth.

Like the other parts of the dunes, it is a barren wasteland filled with Mantis and other insect threats; the only difference is that in the far southwest, near the world scar, is a set of large ruins, supposedly a derelict town, its main features are the coliseum with the manticore statue.

Supposedly this is where John Dahkeya died from the Wyvern attack.

In lore, John Dahkeya and Raia were just fleeing from Nosti that was already sinking beneath the sand when they were heading to the city in the area, but they find out it is crawling with wyverns. The couple waits out the wyverns for a week. However, the wyverns are still hovering above them after a week, and John tells Raia to run away with their sabertooth cat mount while he draws the attention of the wyverns. This causes him to get seriously burned, and with Raia being heartbroken over his death, she somehow killed all of the wyverns and soon got wyverns of her own. Many years later, Raia guides Helena Walker and Sir Edmund Rockwell to the southwestern dunes since the city that she went to years earlier is actually the ARK's space station entrance. This is where Helena and Rockwell decide to travel to Aberration.