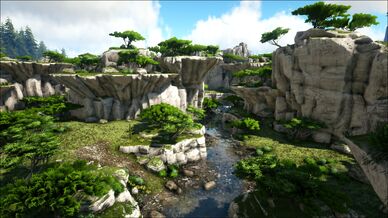 Found in the Northwest corner of The White Cliffs, The Paradise is a canyon region noted for having one of the largest concentrations of

Deinonychus on the map. This makes it a great place to collect eggs for breeding, but the high concentration of Deinonychus and the close quarters in the canyon proper makes quick snatch-and-grabs that avoid combat altogether unlikely, even with a flying mount as the getaway. Any would-be egg thief should be prepared to fight or flee from as many as a half dozen or more of the dinosaurs when grabbing an egg.

A small cave near the southern end connects The Paradise to The Maul. Above the canyon at its northern end is a large plains region where many of the larger creatures of The White Cliffs can be found, with

Allosaurus appearing regularly, along with the occasional

Brontosaurus. Several of the cliffs on the canyon walls have Metal-rich rocks as well. Finally, there are several plateaus within the canyon that see no spawns and are high enough from where the nests spawn that they could be used for base building, or at least as a safe area to flee to after stealing an egg.