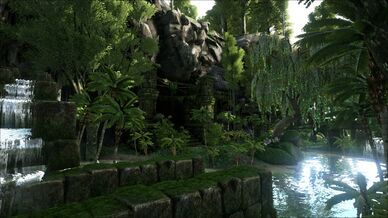 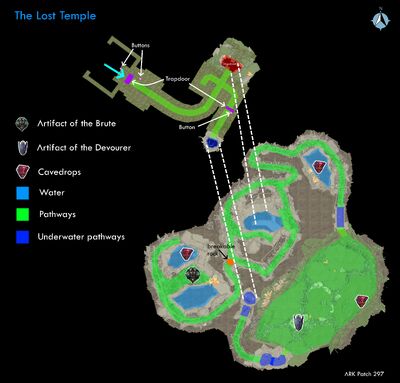 The mysterious site is hidden deep inside the jungles of Valguero and permits entrance to a cave system containing two artifacts; the

Artifact of the Devourer.

As the name suggests, The Lost Temple is a mysterious location, hidden deep in the jungles of Valguero. The entrance to the cave, rewarding the brave survivor with not one, but two Artifacts, is hidden behind the former entrance to The Lost Temple.

Stalactites hanging from the ceilings and stalagmites growing on the grounds litter the caves, while the Aberration large glowing crystals eternalize the Earth's age in the caverns The Lost Temple permits access to.

The dangers of the cave are not so much in the inhabitants, but by the length and fall dangers in the final cavern. With proper preparation the cave is fairly easy, for a beginning survivor it is challenging enough though.

The Lost Temple hosts the

Artifact of the Devourer, needed to summon

Megapithecus (one of the three bosses on Valguero) on Alpha and Gamma difficulty respectively, and as with all mysteries of The Lost Temple, the Alpha Artifact is much easier to obtain than the Gamma Artifact.

Along the way, the survivor can enjoy a diverse array of breathtaking sights in The Lost Temple cave.