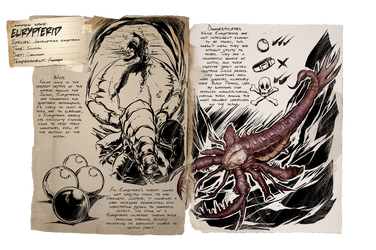 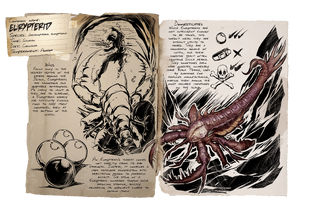 Dossier
These values may differ with what you see in-game or written elsewhere, but that is what the dossier says.
Species
Jaekelopterus eurypterus
Time
Silurian
Diet
Carnívoro
Temperament
Aggressive if approached
Release Versions

No
Data
XP for kill
4 XP
Habitat
no MAP available

Found only in the deepest depths of the waters around the Island, Eurypterids are dangerous and adaptable arthropods. As likely to hunt as they are to scavenge, a Eurypterid rarely has difficulty finding food to keep itself nourished, even at the bottom of the ocean. An Eurypterid's threat comes not directly from its raw strength. Instead, it combines a hard defensive exoskeleton with debilitating poison to powerful effect. The sting of a Eurypterid increases torpor while reducing stamina, quickly rendering its opponent unable to defend itself.

While Eurypterids are not intelligent enough to be tamed, this doesn't mean they are without utility to tribes. They are a wonderful source of chitin, and their digestive tract often contains Silica pearls. They sometimes even have ingested incredibly rare Black Pearls, used by survivors for advanced manufacturing, making them among the most valuable creatures on the island.

Silica Pearl clams or for the Eurypterids themselves, the Eurypterids will swim towards the invader and attack. They can envenomate the survivor, knocking them out before dispatching the paralyzed body.

This section displays the Euriptérido's natural colors and regions. For demonstration, the regions below are colored red over an albino Euriptérido. The colored squares shown underneath each region's description are the colors that the Euriptérido will randomly spawn with to provide an overall range of its natural color scheme. Hover your cursor over a color to display its name and ID.

Ichthyosaurus surprisingly can be used to farm the Eurypterids, because it is immune to Inconsciencia and has no knockback, which effectively increases the damage against the Eurypterids since they will never try to flee and stay in range. Keep in mind that the Eurypterids will still deal normal damage to the Ichthy.

ballesta. Once you've killed them, swim down and safely collect their corpses with a

Pike can be used by more alert, daring survivors who have powerful melee damage. Otherwise, mounts and ranged weapons like the ballesta o el 20x20px lanzaarpones are your best shot.

Eurypterids are small enough to be easily hidden in the ocean's many plants and reefs. Use caution when collecting pearls, as their venom causes extreme amounts of Inconsciencia, while their actual damage is low, they can even render larger creatures unconscious easily. This can turn a simple collection mission on its head quickly.You might also aggro more powerful aquatic dinos such as