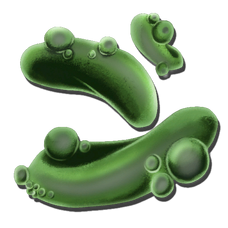 Reaper Pheromone Gland is an item in the Aberration-DLC of ARK: Survival Evolved. It is gathered by accessing the inventory of a deceased Wild

It is used to summon the Aberration Boss.

It can also be consumed by players and dinos to grant the Pheromone buff for 300 seconds (effect stacks with each consumption). It prevents baby

Reaper King from targeting the survivor/creature or dealing damage to them unless it is already targeting something nearby, or carried on the survivor's shoulder. Baby Reapers cannot be controlled in any ways until they reached Juvenile, meaning they will lash out at anyone and anything without the buff. The only exception of recieving damage was when it is already attacking another survivor without the gland effect nearby.

You get this from killing a Reaper Queen.

It's retrieved from the inventory when killed. The amount is randomized from 4 to 5 Glands.