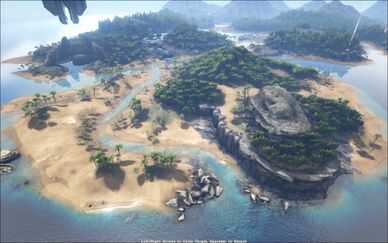 Cragg's Island is located south of the Red Obelisk and comprises the southernmost point of The Island. Its location provides several advantages for survivors. Its small size makes it relatively easy to clear of predators, creating a safe zone for communities. A densely-wooded hill with a clearing on top has ruins and an explorer note, and provides a good view of the surrounding area, particularly to the northeast.

Cragg's Island is bounded by ocean on three sides and separated from the mainland by a river to the north, making it easily navigable by boat, but for those seeking isolation there are also dense forests, cliffs and quiet shores in the south and east.

The shallow stream bisecting Cragg's Island and river to the north are excellent sources of fish, and river rocks are a handy source of metal for new players. Its proximity to the red Obelisk is beneficial for those wishing to transfer tamed animals or items between maps. And the Writhing Swamps are close enough that an expedition to gather valuable resources such as Rare Mushrooms, Rare Flowers, Leech Blood or Plant Species X Seeds does not take too long.

The island is surrounded by the sea to the south, west and east. In the north a river separates the island from The Footpaw and the Southern Jungle.