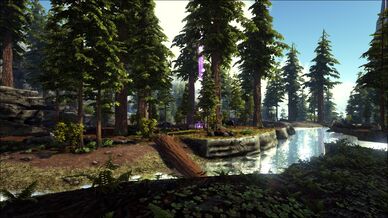 The Island is a region in the redwoods, it is near the bottom left of the map and is outside of the Pin limit of 10 to 90. Nothing spawns in the waters around The Island and it seems nothing spawns on The Island itself, and only creatures that wander in are present. It has a total of 4 red woods trees, each with two snap points for a tree platform, a nice place out of the way of traffic to build a base on PVE or a large PVP Stronghold, thanks to the high cliffs on one side and on the other its a love and hate relationship, if you can secure the western highground you could be quite a troublesome place to raid thanks to the large redwoods someone would need to cross to reach you on foot, and even harder to sneak up on while uncroying dinos if they chose to fly. It has a small swamp that houses Plant X seeds as well as a metal node region you can walk to on a Magmasaur to farm. If one also chose you could put up many turrets in the trees to stop flyers to add to the threat and fear of thylas, as well as installing dodos on each to act as alarms if killed(name them by their cords to be easy to find).

When you go straight to the east, you're close from The Moore, under the cliff, at which you find some swamp resources.