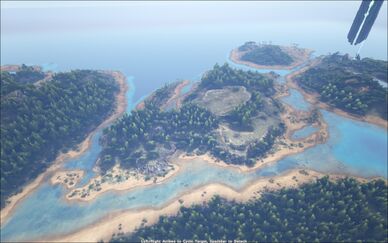 The Footpaw is a small island located in the south, bordered by two rivers on the east and west, the sea to the south and the Swamp Biome to the North. Due the fact that there are not many aggressive dinos around and that the Southern spawn points are near The Footpaw, it makes for a well populated area in which many beginners set up their first base. The many hills, small cliffs and closely packed stands of palm trees cause skittish herbivores to get stuck very easily, making hunting relatively easy. In the middle of The Footpaw you can find the Weathertop, a plateau. Watch out, because sometimes a Carnotaurus will wander down from Weathertop! While poor in Metal aside from the smooth rocks along the rivers, The Footpaw is lush with vegetation, making gathering berries easy, and has plentiful trees and rocks for Thatch, Wood, Stone and Flint. In addition, there are Castoroides typically in the stream separating the area on the east, making for abundant Cementing Paste at an early stage. The small peninsula on the south side is a defensible location for PvP, as the peninsula is narrow. This allows for a small wall or spike wall and behemoth gate to discourage raiders.

Situated south of The Redwood Forests and north-east of Craggs Island. Further, the Writhing Swamps connects to The Footpaw Isle, which makes some parts dangerous! It is separated from the westernmost of the Southern Islets to the east by a wide, deep river, and from the Southern Jungle to the west by a shallower one. This area boasts the best crossing point across the Swamps and into the Redwoods, around the middle-north of the The Footpaw there is a sandy bridge across the Swamp waters that is only around 30 foundations long, it can be crossed in mere seconds without the fear of leeches or hidden predators. Fortify this area, and you will be able to cross between the south and the Redwoods whenever you feel like it in complete safety, which is normally a difficult task. Also, it is much quicker to travel from the swamps to the ocean (in case you live in the redwoods and want oil or silica) through the The Footpaw than through the Southern Islets, which gives this route to the ocean another great reason to travel.