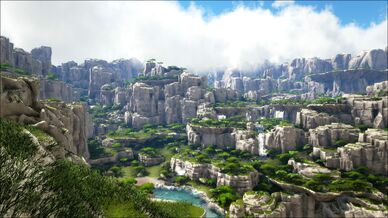 The White Cliffs also known as The Chalk Hills is a region in the Valguero DLC.

it's one of the best places to start in in Valguero, but you'll have to watch out from

You can also get a ton of

The chalk hills also have access to three Rare resources, the

you can also find some good early game creatures there, the

lymantria. To know how to steal

The White Cliffs is a vast region that houses a diversity of Creatures, including the

Deinonychus. This region also contains many spots for building and resource gathering is pretty rich. Also known as chalk hills.

on PVP it's not very recommended to live there, due to its open areas.