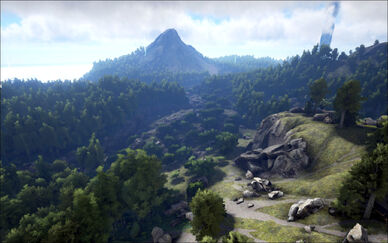 Smuggler's Pass is comprised of two main areas. The first stretches from a forested bay on the north coast, cutting across the peninsula containing The Hidden Lake, and ending near the river mouth beneath Far's Peak. Roughly midway along the ravine's length is an island of elevated ground. This middle stretch is also the ravine's steepest area, with the two ends being much more shallow. Despite having dense forests on either side for much of its length, within the ravine there are very few trees at all. However, there is an abundance of stone in the ravine, as well as a reasonable amount of shrubbery. The ravine is flanked by dense forest on the east, while to the west is comparatively open and rocky terrain over-looked by cliffs at the base of Winter's Mouth.

The lower stretch of Smuggler's Pass is a river canyon bordered by steep cliffs and home to two tall mesas. The river in the canyon flows from the north-eastern corner of the Redwood Forest towards the ocean in the north east of the map between The Hidden Lake and Far's Peak. The walls of the canyon are quite steep-sided but gradually become gentler to the north-east. It can be a dangerous region, often home to large, vicious predators.