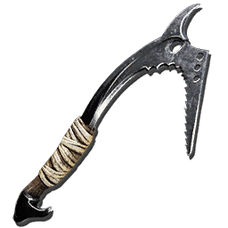 It can be used to climb up vertical walls and obstacles. Given that ARK Aberration features many vertical elements, survivors will find plenty of use for the climbing pick.

To use the climbing pick, walk up to the surface of a cliff/wall/rock/obstacle until you see a small green arc appear in front of you. If this arc does not appear, the pick will not work on that surface.

To initiate a climb, use your default attack button (default

). Once you are attached to the surface look around and notice that the green arc moves around. The arc indicates where your next move will take you, this can be in virtually any direction. Use the same button you used to initiate the climb to continue climbing.

If the arc turns blue, this indicates that your next move will detach you from the surface and you will jump up/down and you should land safely on your target. If the arc turns red, it means you cannot move there.

). This attack can also be used while you are attached to a surface by using the same button. If on the ground, this can be used to harvest stone, metal and crystal.

The pick uses durability for each climbing move you make (not just the initial attaching) so make sure your pick won't break before you reach the top/bottom.

Using the pick on player-made structure wall (except for

Tek) will damage the wall's durability.