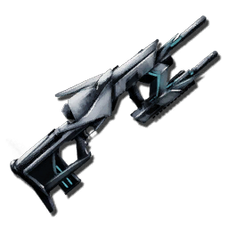 The Tek Rifle has a built-in scope lens that increases the sight range when activated, similar to the

Scope Attachment for lower-tier guns. The Tek Rifle scope also has a night vision function, allowing the scope to be used effectively at night. To zoom in while aiming, use the scroll wheel.

The Tekgram is obtained by defeating the

Manticore (Beta), or the

Ice Titan. Defeating the higher difficulty versions will also give the player the engram.