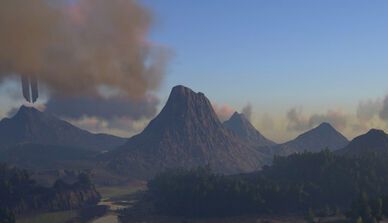 Volcano is the tallest mountain in the game, located near the center of the Island, towards the Blue Obelisk. See also Far's Peak which is often confused for a Volcano, due to its flat peak, and The Grand Hills, the area around the volcano.

The name "Volcano" is an unofficial one, used by the community. The in-game location is named an "Unknown Region", much like Herbivore Island and the areas under the Obelisks.

The volcano itself, much like most of the other peaks, is dead rock, with approach to the summit often patrolled by wild

Argentavis and an occasional

Sabertooth. The surrounding area is filled with dense forests and two rivers; one to the north-west and one to the south.

At the foot of the mountain, to the East, the central cave can be found with the Artifact of the Clever.

The volcano has a large crater with lava and the entrance to the Tek Cave. The descending path leads between the rocks to the north. Temperatures outside the crater vary; during the night it's freezing cold, but during the day it's burning hot. The crater itself is always heated by the lava.

Obsidian spawn on the slopes, while

Crystals can only be found near the mountain top.

Plant Species X Seed and other

The most accessible approach to the peak on foot is from the West - the path begins at the coordinates 43.5°/33.3° and leads up between the rocks towards North-North-East.

Another steep(50° or cliffier) shortcut starts from the northeast part of The Grand Hill which only allows animals with good climbing ability. Players may climb up via this way without the use of Tek Boots.

An alternate, quicker way to reach the peak is by using a flying mounts, such as

The volcano has lava only in the middle of it, at the entrance to the tek cave, so don't worry too much about the lava unless you are at the edge of the big crater where there is lava.