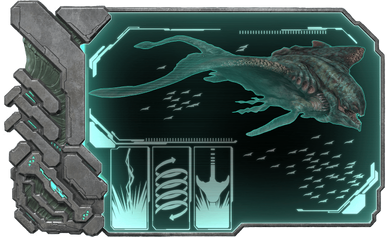 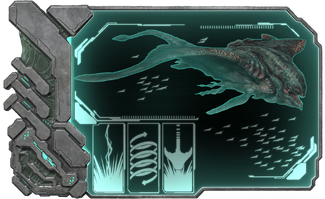 The Desert Titan, a.k.a the Sky titan, is an aggressive creature. It has small but powerful minions called the flock, that follow it and attack to protect the Desert Titan. The Desert Titan can also summon lightning strikes from the sky.

The Desert Titan bears a resemblance to a hellish manta ray with blue coloring, razor sharp teeth, piercing eyes, gills, multiple fins on its underside, a large paddle like tail, barnacles growing on its wings and an eerie purple glow.

Items
The item entry "Items" contains at least 1 and at most 2 of the following items.
as item or as blueprint
with quality 180% - 300%

Items
The item entry "Items" contains at least 1 and at most 2 of the following items.
only as blueprint
with quality 180% - 300%

This section describes how to fight and kill the Desert Titan.

Due to its ability to fly, the average strategies for the other titans are rendered for the most part useless. This means you can't utilize powerful land mounts such as Rexes or Gigas to brute force your way into killing it. However the general static behavior of the Desert Titan leaves it open to several strategies:

The lightning attack starts with marking targets, targeted players or creatures will be given a Marked for Lightning status effect. After this status effect expires (4.5s), the area around the player or creature is lit up with lightning, which doesn't do damage immediately, but indicates the area will be struck by lightning within a few seconds. The lightning attack can deal tremendous damage, enough to one-shot even heavily armored players (one lightning bolt was enough to kill a character with almost 3250 armor and 500 health (tested on Singleplayer)), but is avoidable due to the long charge-up period. If you hear a noise that sounds like a crackling fire, it means you're too close!

The flocks act as a close range guardian for the desert titan, attacking players and mounts that get too close to the desert titan, a message will appear when you are targeted by a flock, the flock can also deal heavy damage and is more than capable of killing under armored players in 1-2 strikes. As of update v287.110, Flocks will also dismount players hit.To take down the flock, shoot them with a high-tier fabricated weapon or Tek Rifle while they are flying away from you. Shooting at their sides or heads will yield no damage and if they've targeted you, it would be much easier to shoot them from behind. If flocks are killed the Desert Titan will respawn them, but while they are down this leaves the Desert Titan a bit more vulnerable.

These attacks are focused on players and creatures that manage to board the desert titan's back. You can predict this attack by keeping a careful eye on the Titan's tail, which will begin to lift when it's about to perform a Tail Slap. It will not use this attack initially but once it suffers some damage or when one of its corruption nodes is destroyed, it becomes a common attack if you are above it.

The Desert Titan, other than its constant swing and tail strike, is at its weakest when attacking close by; it has several blind spots that it can't defend against without the flocks. Be mindful of the flocks and lightning it gives and this weakness can be exploited.

The Desert Titan is tamed by attacking the corruption nodes on its back while dealing as little damage as possible to the Titan itself, as the amount of damage you do will affect its HP after the tame is complete. These nodes will only spawn after they have been struck by a Lightning Strike from the Desert Titan. The tail node can not be made vulnerable to lightning strikes until the wings have been cleansed. After the destruction of the first corruption node, the Desert Titan will start performing tail slaps, which happen erratically and deal heavy damage. It will always strike its left or right wing, as well as a section near the base of the tail.

One strategy to employ for taming the Desert Titan is to use a Quetzal with a platform saddle that has the rider enclosed in a structure. This keeps the flocks from dismounting you nearly all the time. From there you can fly to its corruption nodes when you become marked with lightning, then when the corruption node is struck and vulnerable, chip away at it with constant attacks. If you see damage numbers greater than 1, reposition as high as possible to make sure you're only hitting the node. The Quetzal should be leveled up in health, melee, and some stamina to maximize longevity and damage output. (Despite damage numbers showing for 1 when hitting corruption nodes, damage DOES matter.) Do NOT land on the Desert Titan with the Quetzal as it will likely bug out and be stuck in a landed animation, making it vulnerable to being marked for lightning. If it gets stuck in this animation, dismount as soon as possible, preferably not when lightning is about to strike. Having a way to mitigate fall damage such as Tek Boots or a Glider Suit, will save you a lot of hassle.

Another strategy, likely the more intended method, is to use a Tek suit to fly around, bait the lightning strikes to attack the nodes, then using an accurate weapon such as the Fabricated Sniper Rifle or Tek Railgun to do damage from afar, avoiding the flocks if they target you. If you're feeling more daring and have a high armor value and additional armor sets, you can land on its back after a corruption node is exposed and hit it with a sword. The flocks will deal a lot of damage so having medical brews helps a lot.

The easiest strategy by far will involve the same Quetzal as the first strategy but you don't even have to attack! Make the Desert Titan use the lightning strikes to reveal the nodes and keep just beneath the corruption nodes to keep striking them with lightning. This does a lot of damage to only the corruption nodes and since you are beneath the titan it is a bit easier to avoid any damage with the Quetzal. (As you won't have to attack you can invest more levels into health and stamina.) It is worth noting that besides the node becoming exposed, there is no feedback from the titan if the lightning strike was successful, except that the node's exposed duration will refresh. If it stays open for a long time, you're hitting it!

After all the corruption nodes have been destroyed, the Desert Titan will stop moving and become claimable. After claiming it, it will come pre-equipped with a special

Platform Saddle and can be controlled via a special cockpit area on the saddle. After claiming it but before renaming it, you can see if it was an alpha, beta, or gamma version.

Titans from starving to death on single player and adjusting the Raid Creature setting. This is likely a bug. On unofficial servers, setting the following .ini in the gameusersettings will keep the titans from losing food: RaidDinoCharacterFoodDrainMultiplier=0.000001 (Setting it to 0 does not work, but setting it to an extremely low number does, as tested. Results for singleplayer doing this have yet to be determined.)

The following items are needed to open the Desert Titan Portal:

Even though the Desert Titan is the weakest in both offensive and defensive abilities, the titan is rather flexible in its roles depending on what is built on its platform saddle.

Mobile base: Due to all of them having a platform saddle, this role is also for the other two Titans. Still, the best option for this role is the Desert Titan. Although you can’t improve its speed, it has the ability to fly. Its turning radius is very large compared to most adept flyers, but it can maneuver in all three dimensions. It also has the biggest platform to build on. Its Desert Titan gravity buff can make players put as many things as they want without repercussions to its own carrying capacity.

Pack Mule: While its own weight isn't phenomenal (and cannot be improved): the weight of creatures, players and structures on its back is not added to its own weight. In addition, the 'Desert Titan Gravity' buff you get while standing on top of the titan allows you to move regardless of how much you're carrying (albeit at the encumbered movement speed). This buff lasts for a few seconds after getting off the titan. Paired with the gasbags relatively high carry weight, the desert titan can carry an infinite number of encumbered gasbags back to base, giving players the potential to quickly amass resources for building their projects and bases. The titan can also be paired with Tek hover skiffs as a medium in carrying the gasbags all the way up to the titan. If both gasbags and tek hover skiffs aren't available, a player can use an argentavis that can fulfill both roles at once. All three creatures and items mentioned can greatly increase resource transport to the titan. On top of that, players are able to bring creatures that are specialized in gathering a certain resource in cryopods. This can allow a player or a tribe to remain in a resource rich area for prolonged periods of time, no matter how dangerous an area can potentially be.

Flying Aircraft Carrier: Since it has the largest platform, the desert titan can be a mobile and airborne landing zone for other flyers so flyers don't have to land on the ground to regain stamina and removes the flyer's risk of attack from land creatures. Pairing the titan with many fliers can create an aerial force that many will fear to face.

The Desert Titan can also be tamed to help defeat the