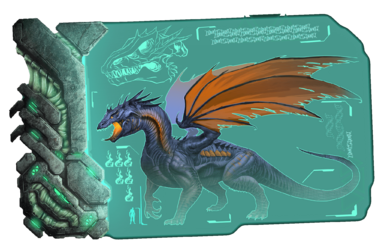 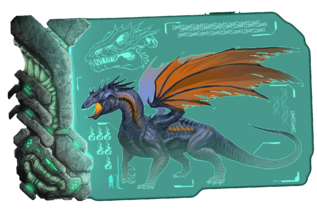 The Dragon is massive, easily dwarfing both the

Megapithecus in size, it stands and walks in a bipedal stance. However it will become quadrupedal when sprinting. It is purple in color with orange wings and some orange patterning running along the side of the body with the 2 most notable being large orange strips running with the first running from the back of its head to the base of its neck and the second running along the sides of the body, Its head has a crown of horns.

The Dragon used to spawn with an extremely diverse range of colorization, however this was changed during the development of the Dragon's Boss Arena.

The Dragon has different colors depending on its difficulty level:

Note: The Dragon in the Ragnarok Arena has the same stat values, but takes 3x damage (or consider it suffers a 2/3 Health Nerf).

The Firebreath-attack yields up to 2000 damage (probably depending on the amount of flames the target is covered with) and is applied over a time of 10s. The flame-damage is not affected by the Melee Damage-Stat and thus cannot be increased by level-ups.

テイム方法 (Survival of the Fittest)[]

'The Dragon can only be tamed in Survival of the Fittest - in which, after 20 - 40 minutes, it'll disappear.

This section describes how to fight against the Dragon.

Please keep in mind that the Dragon is considered by many players to be the third toughest boss to defeat (Previously the hardest, but that title was overtaken by the

King Titan, but due to the release of Genesis: Part 1, it was overtaken again by the

The Dragon is the strongest of the 3 island Guardians and should be saved for last due to how tough it is, on top of that, taking down the

Broodmother will help give the players a advantage due to having new better equipment to take on the Dragon with.

The Dragon is far stronger than the two previous Guardians on the Island, thanks to the ability to do percent-based fire breath damage. This fire will drain 20% of anything's max health as well as doing some direct impact damage, so brute forcing with your dino armies won't exactly work out like it did in the

You'll need to pay attention to the Dragon's fireball and minion summoning attacks, as well as making sure you bring mastercraft to ascendant quality firearms that do good damage. Primitive weapons are a waste of time and will do little damage. As for the previously mentioned attacks, the fireballs do a fair amount of damage (less to herbivores) and have a large explosion radius, as well as having the ability to directly damage riders.

The minions that the Dragon summons are hostile

The dragon should be saved for last due to the difficulty and saving it for last gives you more time to get better equipment and ideal tames plus by then you'll have access to some tek equipment.

If you have access to Scorched Earth, Ragnarok, or Valguero DLCs, then Wyvern Milk can drastically help as it makes the player/dino invulnerable to the flame breath.

While the biggest of all the Island bosses, its backside has the largest hitbox. The ruins around the arena can cause the dragon to be stuck on, allowing shots to be taken afar (but do not rely on this happening during the fight as it will eventually fly away).

Sometimes the dragon will only go to the player, giving your army a chance to cause damage to it.

Wyvern Milk disables the dragon's fire breath making it incredibly valuable for a fight like this.

If players spread their creatures around and completely surround and pin the dragon, it would be distracted and focus its fire attack on one side, helping your unaffected creatures live a little longer during the fight.