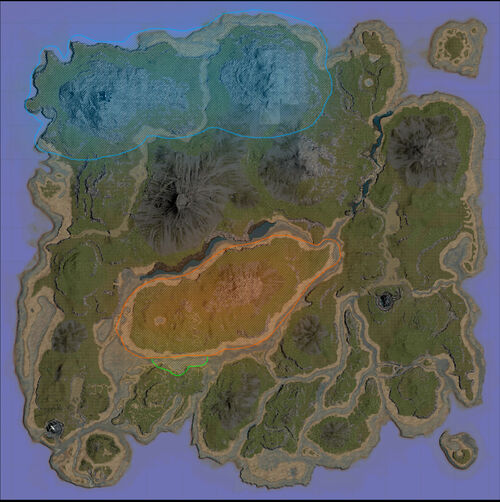 Trilobite, and others depending on nearby biomes
Resources:

Titanomyrma, more depending on location
Resources:

石, more depending on location

Trike, and others depending on nearby biomes
Resources:

Titanomyrma, and others depending on nearby biomes
Resources:

Extreme Sunlight (During the Day) Meteor showers, Hypothermia}} (During the Night)
Creatures:

Titanosaur and others depending on the mountain's location
Resources:

Mountains are arguably the most dangerous part of the island. They are home to

Giganotosaurus and multiple other varied threats (like extreme temperatures). However, mountains hold the largest amount of

黒曜石. They are also an Alpha Creature spawn point. It is not recommended to live in this area, unless you can reach top of the mountains, where very few predators can reach you.

Rexs and Carnos usually patrol the basins between mountains, which means that any passage between will often lead to confrontation with them. Wild packs of vicious Raptors and Terror Birds patrol endlessly, eating anything they can get their mouths on. Sabertooths and Allosaurus packs also prowl the basins. The Giganotosaurus, the apex predator of ARK, calls this land home and will swiftly end any oblivious player's experience. As always, Argentavis flocks keep the airspace on lockdown and can sneak up on players when least expected. Traveling with more than one tame through the mountain region can be life-saving, not only for the player but for the tames themselves. Although mostly all mountains are in the northern area, there are still some zones in the south that resemble a cross between a grassland and a mountain. In these zones there are fewer threats, but also fewer materials available.

Thylacoleo, and others depending on nearby biomes
Resources:

The Redwood Forests are similar to jungles, with many trees and a good amount of plants, and also feature redwood trees that cannot be destroyed, with wide trunks and high treetops. These trees will allow certain creatures to climb on them. These redwood trees also can have a special structure placed on them, the

Wooden Tree Platform, allowing players to build bases off of the ground.

Threats include the Terror Bird, which is fast and can pursue and kill most early to midgame players when in a pack. Troodons and Microraptors also target players. Dire Bears can spawn here, and while they are only aggressive to player near to them, when accidentally aggravated they can be devastating. Thylacoleo wait, poised on the sides of the large redwood trees and can wrangle a flying mount to the ground, pinning the player. Always look upwards to avoid this. The very rare Titanosaur can spawn in this biome, and extreme precaution must be taken when around them. There are benefits to venturing into this gloomy environment however. Giant Bee hives can appear on the sides of the large redwood trees, wood is obviously abundant and the seldom-remembered Archaeopteryx glides between trees.

On The Island, the redwood forests are located across The Redwood Forests region in the center of the map (also known as Deep Island) and The Red Peak.

Spino, and others depending on nearby biomes
Resources:

Although you might not consider it a biome itself, rivers have their own uniqueness. They are a great source of

火打石 due the amount of rocks inside and at the margins of the river, as well as an invaluable source of water when in the mainland. The other materials available will depend on the Biomes it makes frontier with. The animals at the river will also depend on the other Biomes around, but some will only spawn at rivers, like

Spinos. It's also possible to find

Coelacanth—and closer to the ocean—

Trilobites. One animal found exclusively in rivers is the Casteroides, or Giant Beaver.

There are two main types of rivers, one with clear water and one with murky water. The latter is mostly located at high grounds and is more dangerous since it has very little visibility. It's also possible to find waterholes and bays that have a chance to spawn

In order to survive, the player must make several risky moves if they wish to establish a prominent hold within the snow biome. Due to the freezing temperatures, the environment can turn into more of a problem than the creatures. A good remedy to this problem is

Fur Armor, but this is crafted using

毛皮, which is obtained from the animals living within the snow biome itself. Thus, the player will need to launch several "sting operations" into the biome in order to extract 毛皮. This can be aided by using a dinosaur that can carry animals like an

Argentavis. By grabbing the animals and bringing them back to safely kill them elsewhere, one can amass 毛皮 safely, albeit slowly. A good tip for beginners is the fact that the

Sabertooth does not drop 毛皮. All players, however, must note that the use of the Fur Armor is rendered useless if it becomes wet, but it will instantly dry outside of water.

One must also note the animals that live in the snow biome can pose dangers and opportunities.

Direwolves prowl the area constantly, keeping the snowy landscape on constant watch. In addition, the Daeodon clusters prove just as troublesome, but the latter can heal itself in combat. The only prominent dinosaur here is the

Rex, which can keep players on lock-down for a long period of time, so confrontation is best left avoided. The Rexes here hunt actively and suffer no consequences from the cold, which means they are just as dangerous as the ones on the main island. They are best given a wide berth. Keep in mind that

Giganotosaurus can spawn high on the mountains. Such a creature can devastate any intruders in an extremely quick motion. Unfortunately, nothing can save a player from being pounced upon by a Purlovia, unless they manage to spot the mound in the ground before they are knocked off their mount and paralyzed.

If the creatures on the ground haven't provided enough danger for the player, the air is home to

Argentavis by the masses, and they will swoop down to attack unsuspecting players. The ones that spawn here tend to be higher level as well, which proves challenging when facing a swarm. Despite the dangers, the snow biome can be very beneficial.

Mammoths roam in herds within the forest, and taming one secures a lasting source of

有機ポリマー, which is one form of

ポリマー that can be used to make

If a player considers the pros and cons of the region, they can plan ahead and become very successful within the snow biome.

On The Island to the North/Northwest, one will find Whitesky Peak, Winter's Mouth, and their snow-covered slopes. The coast is lined with icebergs and Kairuku as well as treacherous cliffs.

To the west of The Center are two snowy mountains (North and South Snowy Mountain) divided by the Floating Island and Swamps. To the far west of these mountains lie the Snowy Grasslands, which bear many similarities to the Snow Biome with a few differences: the snowy grasslands are textured differently and without snow-cover, and they are slightly warmer than their mountainous counterparts. This does not mean it poses less of a danger. If anything, swarming creatures can gather in even larger swarms and sweep an entire group of tames off their feet should the player attempt to pit their convoy against the swarm.

Extreme Sunlight (During the Day)
Creatures: