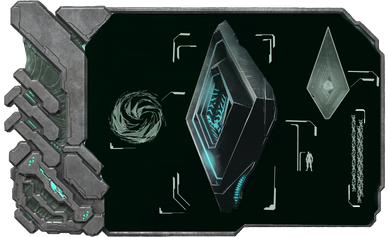 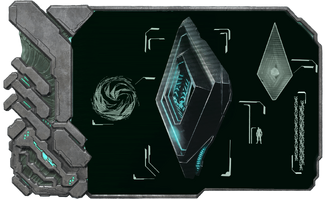 It will change forms periodically to one of the three Guardians, the

Dragon, so it is guaranteed to transform each time it loses 25% health.

It is reminiscent of the specimen implant, having the characteristic shape of a diamond. When transformed into one of the 3 Guardians and summoning Defense Units it takes the form of a mass of hexagonal prisms, and will shine the corresponding color of the difficulty (red for Alpha, blue for Beta, and green for Gamma).

It is the AI that oversees the experiments of an ARK Station and ultimately decides who may continue to ascend higher in the evolutionary chain and who will be terminated. It tends to all the life on its ARK until a signal calls it down to terraform Earth back to normal.

Does not drop anything

You fight in what can be described as rounds, you will need to try to attack the Overseer while defending yourself (and your dinosaurs) from the

Defense Units, while you attack the Overseer it will change form into different Bosses while it loses health until it's destroyed.

The Overseer is one of the most formidable Bosses in ARK. The Player enters its Arena handicapped after being weakened by the journey through the Tek Cave. The Overseer has a total of four forms with separate health meters, and it constantly summons Defense Units and Attack Drones. The minions drop

Element upon death which can be helpful to players using Tek during the Boss fight. Any Element collected during the fight will disintegrate afterwards when the player Ascends.

The Overseer's main form resembles a

Specimen Implant. When it morphs into this form, it brings up an energy shield that lasts for a few seconds and blocks all damage. It also has an area-of-effect laser attack that is deployed in a bottom-to-top "orbital" fashion, making it very difficult to avoid. Lastly and most notably, the Overseer likes to employ a shock/stun-lock and dismounting ability.

The Overseer's other three forms are Tek-energy clones of the Island's three Guardians:

Broodmother Lysrix. Each of these forms displays characteristics and attacks of the original. For instance, the Megapithecus throws energy boulders while the Dragon breathes fire. The Overseer does not have every attack, however; every boss form is unable to spawn its corresponding minions, and the Dragon form cannot fly upwards.

Even a fully-imprinted, starting 150+ Rex will die quite quickly at second phase. One significant issue is trying to reach the platform to access the Overseer Arena within the Tek Caves due to the danger of the area, both navigation-wise and dinosaur-wise.

During the boss fight, make sure you have some players focus the droid-minions and have a plan for if someone gets knocked off. Communication will make the fight much more bearable.

Defense Unit to prevent being overwhelmed, So long as you watch carefully for the Overseers stun attacks, use the pillars as cover against the stun attacks and periodically courage roar your tames you should be in good shape. If using the Therizino strategy any meat you gathered from the tek cave could be used to heal your Yutyrannus when it's getting low on health and any Daeodon you brought giving you a unlimited heal effect so long as the Daeodons are alive since they're the only tames using meat other than the Yutyrannus. If doing this at the very least have 2 Daeodons so that they can heal each other, at least 1 Yutyrannus that you can use to buff your dinos and the rest would be Therizinos.

Equipment wise tek is a must for the fight especially since the Overseers minions drop element when they die, also at least have ascendant level saddles for your tames. Bring plenty of recipes especially Medical Brews and Sweet Vegetable Cakes. Players can hover above the overseer and rain their attacks with minimal damage being done to them. Watch out for the Attack Drones as they will always be above you.

Because it transforms into different bosses, you can use the strategies you used on those bosses again for the boss that the Overseer becomes, albeit difficult.

The four large pillars you find in the arena can be used as a shield from the Overseer's dismounting stun lasers, since they cannot pass through terrain.