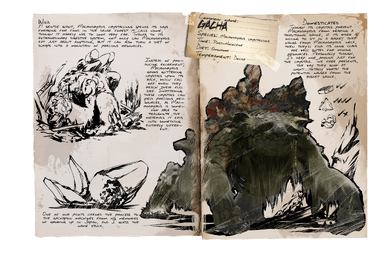 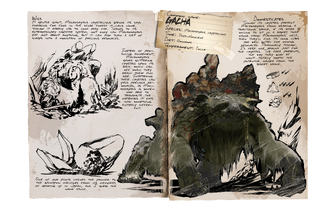 Dossier
These values may differ with what you see in-game or written elsewhere. But that is what the dossier says.
Common Name
Gacha
Group
Fantastyczne
Species
Macrodryadis crystallinus
Time Period
Post-Holocene
Diet
alias not found
Temperament
Docile
Release Versions

The Gacha is one of the Creatures in ARK: Survival Evolved's Extinction expansion.

The Gacha wanders around in The UnderForest, the deepest area of the Crater Forest, swiping occasionally at rocks, trees and bushes; afterwards they sit back and eat, looking around as they do so. They're big and bulky, with what seems to be great stamina, but they are fairly slow both walking, or "running."

The Gacha appears to be a large sloth with crystals and rocks on its back. Szablon:PaintRegions

In the wild, the Gacha will occasionally drop Gacha Crystals which contain various items when consumed in the Inventory. These items include many basic resources such as

Wood to more advanced materials such as

Congealed Gas Balls. In addition to the basic crafting materials that can be obtained from the Crystals, occasionally the Gacha will produce a different colored, glowing crystal of a certain quality that when opened, produces fully crafted items such as

Wooden Tree Platforms or even something with quality such as an

When bred, the Gacha will have a gestation period. Once the baby Gacha is born and claimed, it can have different production options that either parents, and the production options can change as the baby matures. So far it seems this could be due to their diet, however it is currently unknown what causes the options to change. Production options do not change once the baby is fully matured. Its crafting skill stat is unaffected by any imprint bonus.

As the Gacha is usually a passive animal, they really do not become hostile. If you must kill one, they are extremely slow and do low damage. It would be simple to keep out of its range and take one down with a myriad of weapons. The resources they drop when killed are generally very inferior to the contents of the crystals they produce while wild or tamed, so there is very little reason to kill them.

Really any weapon will do so long as you can stay out of their range. Which is not really hard to do.

The are slow passive creatures that pose little threat to your player thus making them not dangerous.

They are slow, have a short attack range and deal minimal damage.

Stone while moving, so watch their food meter when traveling long distances and supply it manually with Berries, which Gachas don't harvest, or Meat.

When static, they eat everything and prefer a combination of

Stone or crafted items and

Element, all sorts of crafted items,

Wood and others are accepted. This list is ordered by effectiveness. Additionally, all sorts of

Eggs have a very low effectiveness.

The Gacha is not tamed by traditional means, but rather food and items must be dropped in front of it, he eats everything you drop! When tamed, Resource Harvesting is set to disabled by default, though Gacha babies have resource harvesting enabled from birth.

), the mother produces a Gacha baby after gestation. When the baby reaches juvenile stage, it starts collecting

Feces. The food meter of Gacha babies goes down faster than

Berries feed them, so it is recommended to use

Stone also feeds them, but at a much slower rate than Meat.

The Crystal Production wheel of the new Gacha is visible from birth.

The baby Gacha is able to feed from the inventory of an adult Gacha. Further research is needed to determine how many babies a single adult can support and other mechanisms.

NOTE: Gachas are solitary creatures, except when they have one (and only one) mate with them. If there is a same gender gacha within 12+ foundation range, they will become 'sad'; other than their facial expression, they will refuse to look directly at the survivor if "Ally-Looking" is on, they will not pick up resources dropped near them (they will make an expression with their head turned away in front rather than grabbing it), and they will not produce crystal or eat anything in their inventory even if

Stone or other resource/item are placed inside.

Also, even if the Gacha of the same gender leaves the sadness range, the previous Gacha with the said gender will remain sad for a time unless reintroduced to the opposite gender Gacha.

Note that baby/juvenile/adolescent Gacha ignores these effect until they are adult, and adults ignores this state towards babies, even if they came from different parents.

The Gacha retains its ability to create resources by consuming items and transmuting them into crystals. Each Gacha, tamed or bred, will only be able to produce 6 random resources from a large pool of potential resources, including many DLC-exclusive ones, making it a renewable source of materials that would otherwise be impossible to acquire naturally in some maps. Their production is always structured so that it can produce 3 'common' resources, 2 'uncommon' resources and 1 'rare' or 'very rare' resource as shown below, with each tier producing different quantities per crystal. Bred Gachas are not influenced by the possible resources of the parents. Via the selection wheel, survivors can select which of the available resources that their Gacha will produce (or to produce them randomly like wild Gachas). Cloning a Gacha will make an exact copy of the resources from the original. In addition, Gachas will sometimes produce 'loot' of varying qualities, which will be denoted by quality-colored crystals (white, green, deep blue, purple, etc).

Despite being able to interact with their nodes, Gachas will not harvest the following:

While slow, the Gacha has a high stamina and a high carry weight to move items from place to place. As they can be carried by

Quetzal, they can also be used for long distance transport as an alternative for

The Gacha will automatically pick-up parcels that are dropped nearby, which can be enhanced with Enable Wandering to make them a roaming vacuum cleaner. This can be used to collect poop, which is one of the few resources that the Gacha will not eat. Be aware that Gachas can eat virtually everything, including weapons, blueprints and filled cryopods.

The Gacha reduces the weight of the following resources by the listed amount while they are in its inventory: Szablon:Weight Reduction Resource