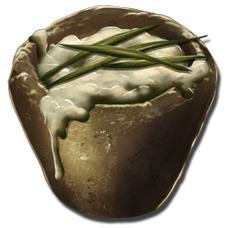 Bug Repellant is a consumable in ARK: Survival Evolved. Upon use, it reduces the aggressiveness of certain insects and other creatures towards the user.

The specific results of the effect are:

The effect lasts for 10 minutes. During the duration of the effect, a transparent pale green haze will be emitted from the user.

Bug repellant can be extremely useful for survivors that venture into caves, as it greatly reduces the threat of being attacked by a variety of dangerous cave creatures. It's also necessary for the taming process of those very same creatures. Additionally, it can make oceanic and coastal ventures somewhat less dangerous as it will help you avoid attack from Manta swarms.

Unlike most other items crafted in the

Mortar and Pestle and

Chemistry Bench, bug repellant can spoil, so preservation may be required.