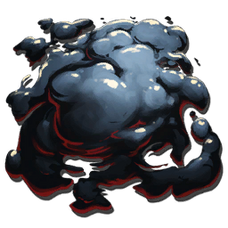 Oil can be refined in a Refining Forge to create

There are 3 main environments where oil nodes spawn: the ocean, Underwater caves and along the beach of the Snow Biome.

To effectively mine oil nodes in the ocean it's a good idea to tame a underwater dinosaur, such as a powerful

While relatively rare, large clusters of oil nodes can also be found in various ocean floor locations. One such cluster can be found at 10.2 latitude and 25.5 longitude.

It's also possible to get a

Ankylosaurus down into most underwater caves. With a

A good strategy to gather these oil nodes effectively as a 2 man team, is to use a

Ankylosaurus mine them on the fly. The weight stat of the Ankylosaurus doesn't matter as all is carried by the quetzal.