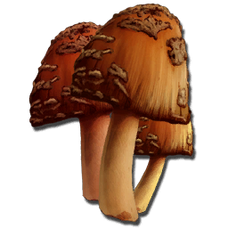 The Rare Mushroom is a crafting ingredient in ARK: Survival Evolved.

Rare Mushrooms are required to craft

Lesser Antidote and to cook the

They are also the favorite food of the

Procoptodon and should be used for taming it.

Eating the mushroom on its own provides 25 Food but you will get the effect Hallucinogenic Spores. Your view is very restricted for 10 seconds. They fill 5 more points of hunger than

Cooked Meat, stack up to 100 instead of 30, but weigh twice per piece, do not require to be cooked, instantly increase your current food amount (instead of over time like other sources) but spoil after 3 days.

In Scorched Earth, Rare Mushrooms can be found while mining

Crystals and rarely when using the

Roll Rat on Aberration can also gather them in large quantities from the Hallucinogen mushrooms.

Daeodon excels at collecting rare mushrooms. When they attack plants that carry rare mushrooms (e.g., cattails on The Center or The Island, or purple flowers on Scorched Earth) they only get mushrooms, so there's no need to empty them of berries, seeds, and fiber.