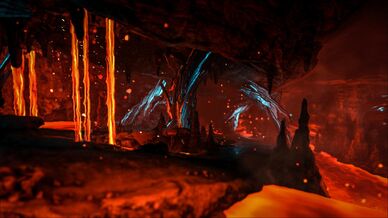 The Tek Cave is a cave located at the summit of the volcano, and upon completing said cave, the player will teleport to the Hall of History, which leads you to the game's final boss.

It is also worth noting that the greater difficulty trophies can be used to open the Tek Cave entrance at lower difficulties (i.e. the

All creatures found in Tek Cave spawn above level 300 (with the exception of Giganotosaurus, which spawns at level 60, but can't be tamed), rendering them impossible to tame.

if one has access to it when the gate is open. However, about half-way down, the cryopods become unusable (which may suggest that using cryopods on the Tek Cave is a feature rather than a design flaw). Also, because of this, it's possible to recover tames that fell into lava, but keep in mind that - due to equipment use restrictions - not all lava pits will allow players climbing back, so proceed with caution.

Following creatures are too big to fit into the cave and will not be able to enter by any means:

Following creatures cannot be warped into Overseer boss fight, but can enter the Tek Cave:

Following creatures cannot be warped into Overseer boss fight, but can enter the Tek Cave only with

Servers that have lost their interactive Tek Cave entrance terminal can spawn it back in with this command while looking at the terminal: