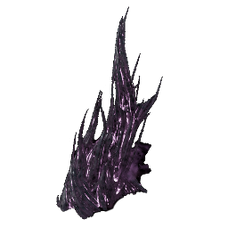 The Element Node is a temporary harvestable structure that is added to the game in the Extinction DLC. It functions in a similar manner to

Orbital Supply Drops in that it must be defended from

Corrupted Creatures for a total of 6 waves while all the nodes are maturing. The difference is that instead of random loot, the Element Node will yield commonly

Element after being defended based on how many of them remains standing.

As of v288.113 when PvE is activated only the tribe that "claims" the Node can harvest it once it is successfully defended. The claiming is optional.

Element over items. The first is that there is no shield to protect the node. The second is that the survivor's performance on defending the main Element Node and the smaller Element Nodes does matter. The more Element Nodes that have been kept alive at the end of the defense, the larger the

Element harvest will be. After a successful defense, it's important that the lesser, outer Element Nodes are harvested before the main Element Node; failure to do so will result in the loss of precious additional

Element. It's also important to note that only metal tools such as the

Hatchet can be used to harvest the

Element, as using Creatures to harvest them will only result in the destruction of the Element Nodes without any

Element harvested (but the

Mantis can be used with a

King Titan, after a while it will stop, causing a nearby Corrupt Element Node to spawn with only two waves. Unlike the ones found around the wastelands, these do not yield any element once defended, but rather, deter it from restoring a portion of its health.

The strategy required to defend the element nodes can greatly vary depending on the actual difficulty. Difficulty can be measured both by the size of the main vein itself or by simply using a spyglass to check the health of the main node. See below for details. While it isn't really possible to over-prepare for such a defense since the quality of your defense matters, you can most certainly under-prepare by mistake and lose valuable dinos and resources in the process. Assess the threat and if you find yourself struggling on the initiation wave or first wave, you may be better to cut your losses and abandon the defense. It's advised to keep non-ridden dinos on the outside parts of the defense to cull the incoming numbers. They can damage the nodes just as easily as the corrupted dinos can.

Tek weapons and MEKs are ill-advised for element vein defenses; they easily destroy the nodes.

Easy: If the main element node has 10,000 HP, it is an easy node and is just a little more difficult than the blue drops. The dinos that spawn are typically between level 1-30 (except for the initiation wave which oddly has Dilos over level 100 on occasion.) A small tribe can easily defend against the waves with nothing much more than primitive crafted crossbows and average tames such as Trikes, Raptors, and perhaps Carnos. Those who have managed to tame a few Velonasaurs will have a much easier time thanks to their ability to shoot down the Corrupted Pteranodons without using ammunition.They also can't damage the element nodes with their ranged attacks.

Medium: If the main element node has 25,000 HP, it is a medium node and is on par with a yellow drop's difficulty. While larger threats such as Corrupted Spinos and Paracers start to make the main bulk of the threat, their levels are generally between 30-90 and can be managed surprisingly well. Some good-level Carnos and Velonasaurs are fine to handle many threats at this difficulty. If you have access to high-quality Enforcers, they can make quick work of the corrupted hordes while also doing minimal damage to the nodes you are defending. Be careful of their fragility and consider using cryopods on those near death in order to preserve them! Quality-level fabricated weapons and flak armor is preferred for those who prefer to be on foot and handing threats that breach the outer defenses such as the pesky Corrupted Pteranodons.

Hard: If the main element node has 50,000 HP, it is a hard node and while the levels of the corrupted horde are lower than they are for the red OSDs (roughly level 100-180 compared to the 200-300 from red OSDs), the difficulty lies in the ability to weave through all of the element nodes to address threats that may get past your outer defenses. Corrupted Wyverns are also a serious threat and can easily flame breath survivors to kill them and make a mess of dinosaur-based defenses. Keep your main defenses outside the nodes and have someone keeping watch of the main vein to handle stragglers that get through or to assist with corrupted wyverns or Enraged Trikes.

Corrupt: This special element node has 150,000 HP and spawns at certain points of the battle against the King Titan. The levels of the corrupted horde matches that of the red OSD (approximate 200-300). Because these spawn in the middle of a fight, you have to make use of whatever you have brought to fight against the King Titan. Corrupted Hordes spawn from both the spawn point for the node and from constant shadow spawns generated by the presence of the King Titan, but the ones that spawns from the node are your main priority. If the main node is destroyed, it will restore a portion of the King Titan's health, prolonging the fight. Thankfully, there are only 3 waves involved in this defense (the preliminary "wave 0" and then 2 main waves.)

(Note for any element vein: Using a tamed Giganotosaurus sounds appealing due to their sheer power and this is not as a bad idea if you're riding it. However do NOT let them wander on aggressive as they will outright obliterate the element nodes and greatly reduce your rewards. Don't rely on a Dino Leash to contain the Giga either as they are easily destroyed. A strong Giga that is ridden can handle a choke point by itself but is abysmal for core defense.)

The main danger of these element node defenses is if you come underprepared. Since these events are optional and can be checked prior to setting up a defense, judge your power level compared to the threat; failure to respect the power of the corrupted horde will commonly result in the death of you and/or your tames. Know when to fight, know when to run.

These Corrupted Creatures can spawn in each wave with varying number. (Keep in mind that this list has yet to be separated based on node difficulty.)