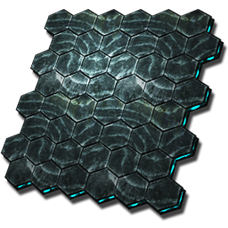 Element is a primary ingredient for equipment in the Tek Tier.

It is gathered from the inventory of Bosses (except Rockwell and the Overseer) after killing them. The amount depends on the difficulty of the bosses. The harvesting method will not multiply the amount. Make sure to grab it quick, because once you are teleported out of the arena, you can't retrieve it anymore. Another way of getting Element, is by finding and defending the Element Nodes in the ARK: Extinction DLC, which spawn around the Wasteland. This is by far the fastest way of getting Element!

Titans do not leave Element on death, regardless of difficulty. Read the below section on how to obtain it in the respective DLC section.

Element is used to craft Tek Tier armor and items. It also functions as a fuel for Tek structures and ammunition for Tek weapons.

It is also used to create

Element Shards which are needed to power some Tek structures.

On the Aberration map, the boss (Rockwell) does not drop any Element. But, it can be crafted by using Charge Nodes, which are naturally found on the map. Crafting Element requires Aberration-specific resources like

Element Ore. Producing Elements will 'overcharge' the Charge Node for 5 minutes, disabling all functions. Even after this time, the node must fully restore all 5000 charge before being considered 'active'. Until 'active', the Charge Node cannot be used to charge batteries, provide charge light or craft Element.

Including the time it takes to recharge the 8x

Charge Battery required for the Element on top of the time it takes for the node to recharge itself to 5000, Charge Nodes can produce 3 Element every 43 minutes. Be wary not to have more than 9 batteries within a Charge Node when forging Element, as fully charging 10 batteries will fully deplete the Charge Node and render it inactive until recharged.

Unstable Element can be unlocked at Level 58, and can be crafted using 1000

Element Dust. Once crafted, there will be a 2 minute spoil timer before

Alternatively, these can be rarely harvested from a completely defended