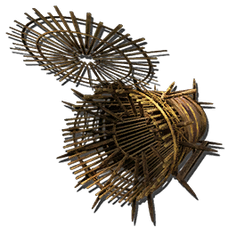 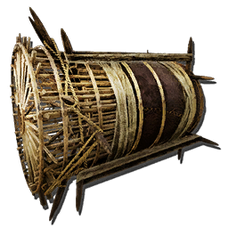 The Fish Basket is a structure in the Aberration DLC of ARK: Survival Evolved. It can be used as a trap to capture and tame smaller aquatic creatures.

The Fish Basket can be placed anywhere on the ground, both on the surface and at the bottom of the sea.

To capture aquatic creatures, the Fish Basket has to be placed near them on the bottom of the ocean. The trap will be initializing the capture for a few seconds. When it's ready, you can capture the desired creature by quickly pressing E while looking at the Fish Basket.

Doing so will capture the creature and you will obtain a Filled Fish Basket, which spoils after 5 minutes which can be replenished by standing inside the water source. Placing the Filled Fish Basket down will release the captured creature. Some of the creatures that can be caught in the trap will be tamed upon release. Unlike most tameable creatures, their level is fixed from their spawn level, and as such, they can not obtain any experience.

Fish Baskets can also capture already tamed creatures, which will allow them to gain experience and it is also useful for carrying them to a different body of water.

Normal untameable fishes can be fed to

Shadowmane in the Genesis Ship as food for taming.

The following creatures can be tamed with the trap:

Berries, but the food bar will not change, making it difficult to predict. It will eventually starve to death despite appearing to be full.

The following creatures are considered a one-time use. Once they have latched themselves onto someone or something, they disappear forever from the tame limit of the tribe:

In addition to the above few, the following tamed creatures can be trapped inside the trap for transportation: