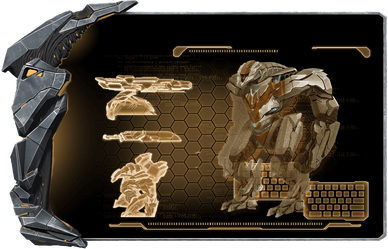 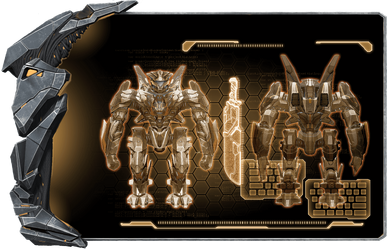 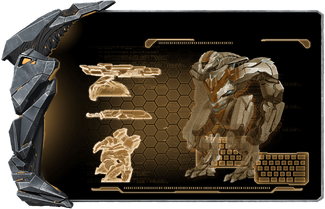 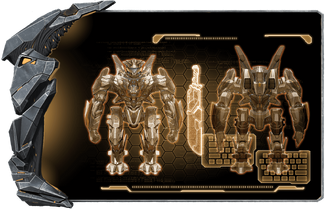 Large Bear Trap
Habitat
The Mek does not spawn on the Map. Instead, it must be crafted at a

The Mek is one of the Vehicles in the Extinction DLC of ARK: Survival Evolved.

Meks are deployable Tek robots that can be piloted by survivors. Armed with a giant variant of

Tek Sword (TEK Saber), they can deal a lot of damage against the target.

OZ-13NV TEK Saber: Designed as the primary weapon, to better suit the skills of our top pilot candidates. Built more for cuts than stabs. Ideal for attacking in combinations.

MS-06BR Boosters: Installed under the unit's feet. On activation, they let the unit hover in the air and move rapidly over short distances. Combine with ranged attacks for maximum effectiveness.

Heat Gauge: Pilots should always monitor their unit's heat levels. Overheating will result in your unit being slow, vulnerable and soon after that? Scrap.

Each RX-103-MEK has a module slot for a specially designed weapon or tool that can be swapped out with ease. These are...

G-01W Mek Siege Cannon Module: A high yield artillery cannon mounted on the unit's back. To handle the recoil, the unit must temporarily anchor itself to the ground, rendering it immobile while firing.

G-02H Mek Rocket Launcher Module: An oversized missile battery that fires in sixteen round salvos, which spread out and then converge on the unit’s target. Especially effective against large, isolated targets.

Forming the RX-412 MegaMEK requires having RX-103 MEKs active and in close proximity, with an Omega Level threat detected on their sensors. To fuse, the lead RX-103 must have a MegaMek Operational Materialization Interface equipped in its module slot. Once activated, the other three RX-103s must move into position around the lead unit, and fusion will begin.

Unlike the RX-103, the RX-412 was not designed for versatility. It is built for one thing, and one thing only: raw power. The enemies we're facing can topple skyscrapers, so we need to be able to do the same. So it only has one weapon... OZ-52XX Vorpal TEK Cleaver: This sword draws power directly from the RX-412 and hones it into a cutting edge that can sheer through a mountain. Swing hard, swing often, and if you get sick of cutting your targets in two, well I guess you could always punch them.

I never imagined my masterpiece would be a giant battle mech, but it's undoubtedly my best work. The RX-412 is the most powerful combat vehicle ever created. If there's anything out there that can overpower the RX-412, then frankly it deserves to kill us.

Can range from ambitious dino-slicing to frequent target practices to waiting patiently for a rider. It infrequently indulges in the luxuries of self-crippling. When in battle, it just lifelessly stares at creatures in front of it with a focused visor.

The Mek appears to be a humanoid creature, but fully mechanical. It has a thin spike on the back of its feet. Its legs seem similar to that of a bird.

When Santiago heard of news that titans are coming to Camp Omega and that they have little firepower, he proposed in building meks, giant robots that are built to fight the titans as an effort to repel the titan threat that is coming to Camp Omega. The tribe built four meks, each with a different design and fighting style that is akin to their pilots but can be easily used by everyone.

The Mega Mek that Santiago designed was built on the teleportation technology of the enforcer robots of Sanctuary. According to Santiago, the Mega Mek is designed to take on the biggest titans and anything that is considered an Omega level threat, threats that are just as big, if not bigger than the King Titan.

Only the regular Mek can be colored and painted. Mega Mek always spawns with the same color scheme and has no color regions, thus making it currently impossible to make alterations to the Mega Mek's natural spawn colors.

This section displays the Mek's natural colors and regions. For demonstration, the regions below are colored red over an albino Mek. The colored squares shown underneath each region's description are the colors that the Mek will randomly spawn with to provide an overall range of its natural color scheme. Hover your cursor over a color to display its name and ID.

M.O.M.I. to combine four Meks. The Mega Mek can only be properly used during the

Alpha King Titan boss fight. The Mega Mek will not work in the absence of an

Alpha King Titan. The Mega Mek will self destruct in roughly 30 seconds if spawned in via console command and entered. However, this can be circumvented if you use the infinitestats command whilst inside the Mega Mek. This will prevent the self destruct from triggering and you can mess around to your heart's content.

The Mek does not drop anything when destroyed.

NOTE: The Mega Mek will always spawn at level 1500.

While Meks are only found as survivor's deployment and not in the wild, they do not pose any form of threat so long as they are not piloted.

One of the best ways to fight a Mek is with a Mek, but proceed with caution and use a

Scout to see how powerful the opposing Mek is.

Either another Mek, or use variants of explosive and creatures to deal with them in PvP.

All of the meks ranged attacks with its pistol, M.S.C.M, and M.R.L.M, have heavy splash damage.

The Mek's sword attacks have a massive range if the Mek is not looking down, making it possible to hit creatures that have a short attack range while not being hit back, minimizing damage done to them.

Meks are difficult to damage and take on in a 1v1 matchup when they are behind you and your tame. This tactic is dangerous against creatures that need massive turning radius' such as gigas.

For players using titans, meks can easily dodge your attacks while landing a series of attacks when your titan is still doing its attack animation. They can even attack you far out of your titan's range.

Element as fuel to do most of their action, excluding running, moving and slashing. The blade still does quite a lot of damage if handled properly. A Giganotosaurus or any other high damage tame can easily defeat a mek once the mek unit has overheated.

The Mek does regenerate health, but at a very slow rate, leaving it vulnerable if not protected.

A Mek with an empty fuel tank will regain health at an even slower rate.

Meks can be immediately "tamed" by deploying an

Meks have two unique stats: Fuel and Heat. Each stat has a corresponding icon on the HUD.

While Meks are indeed strong, they cannot level up unlike Enforcers. As such it is possible for creatures such as Rex and Giganotosaurus to out-damage, out-health, and out-perform a Mek in combat. What Mek is best at is its flexibility and multiple damage sources since it can deal damage with its sword, pistol, boosters and potentially module. It also has no turning radius, so the mek can attack in any direction it instantly faces.

According to Diana Altaras Extinction Note #8, by the time you mastered the attacks and movements of a mek, you will have it moving like a fifty ton ballerina.

Mek's role can change based on the type of module it is attached.

Even this is a less familiar role for this mechanism, meks can damage any kind of structure with the help of his sword. Sword attacks consume stamina, but do not consume fuel. This is a big mechanical Arthropluera. Few people pay attention, but the pilot MEK does not receive impacts. It can not be grabbed, poisoned, stunned, even the pilot does not consume oxygen. A team of base destroyer meks can easily destroy a base once all of the turret's have been drained of bullets. This allows you to apply MEK underwater to destroy structures and walk on the ocean floor just like Karkinos. MEK is affected by radiation, which can be prevented by using Mushroom Brew, and it protects the pilot from radiation, just like a Hazard Suit. Recommendations - do not fly, do not shoot. Shooting consumes a lot of fuel. Pair meks up with Astrocetus for total base destruction.