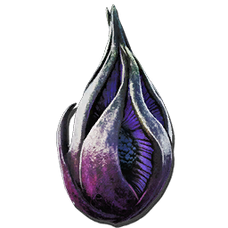 Plant Species Z is a plant in the Aberration DLC of ARK: Survival Evolved.

The Plant Species Z can be grown by putting

Plant Species Z Seeds in a

Once fully grown, it produces

Plant Species Z Fruits, which act as a flash-bang grenade that blind both survivors and creatures for a few seconds. Unlike the Plant Species X, it is not a defensive plant and can't shoot projectiles.

Standing near the plant (both wild and plot) causes it to glow and scare away any creatures that are frightened by light. Furthermore, wild variants restore and revitalize any player and tamed dinos nearby if they have not been hurt or handcuffed for the last 5 minutes. (Due to game mechanics this is not effective on baby creatures). If players stay nearby the plant will retreat its tentacle every 70 seconds and expel a single fruit; collecting it provides one Plant Species Z seed. If all players leave the vicinity for several seconds the countdown will reset; otherwise it will continue producing fruit at the same interval as long as at least one player is nearby.

The Plant Species Z grows the same as any other plot-based plant, consuming both water and fertilizer to grow.

The following items can be used as fertilizer: Table of Fertilizer