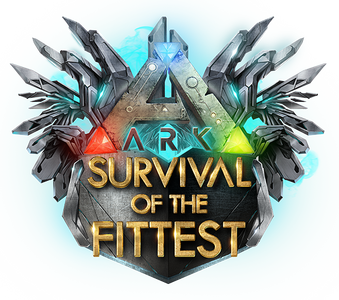 Survival of the Fittest is a Multiplayer Online Survival Arena (MOSA) spin-off of ARK: Survival Evolved. The game is played in rounds and at much faster pace. Its goal is to become the last man standing by killing all other competitors on the island.

In September 2016, Studio Wildcard stopped actively developing and supporting Survival of the Fittest. In July 2017, Jeremy said in an interview that Wildcard wanted to focus their efforts towards the main game and that SotF development may or may not be continued in the future.[1]

Survival of the Fittest is played on servers with special settings. The game takes place at an accelerated pace, with leveling, gathering, taming, and building happening at quicker rates. For game balance, stats have been altered so tamed dinosaurs are no longer as powerful, and engrams, craftables, and supply drops have been rebalanced, and are automatically learned upon leveling up. Fast travel and respawning is disabled. Like in Hardcore mode, players can not respawn after death, so once killed, they have lost the game,but can still spawn like a ghost and go around and watch the game.

The environment consists of the usual island of Ark with slight modifications. At the start of every game, all players start off on a platform in the middle of the island. In the center of the platform is a large quantity of supplies and weapons—players may choose to loot these (though risking being attacked by other players) or directly flee into the wilderness, similar to the beginning format of The Hunger Games. The area in which the players may move is restricted by barriers and gets smaller as time progresses, eventually forcing confrontation between players.

The scores you can earn are calculated according to a modified Elo-System.

Currently you can choose between

There's a leaderboard with the top-players in each category.[2]

Not to be confused with ARK: Evolution Event

To make the tournament more interesting, "Evolution Events" happen throughout the game. Some events may be harmful to players while others may be helpful.

Bosses appear on the central platform and are passive until tamed. They are temporary and usually only last 15–20 minutes. After their expiration time they will vanish along with all items in their inventory. They all start off as level one and can be leveled. The only stat you can increase is their weight.

As of now, Bosses only appear during official tournaments.แม่แบบ:Cn

Some game mechanics are different compared to the vanilla-game, to compensate for the short duration of one round.

An unofficial list of changes can be found on steam (not guaranteed to be correct).[3]

To celebrate the launch of the game mode, Studio Wildcard held a Tournament on August 1, 2015 with 70 streamers competing against each other in teams of 2. Another Survival of the Fittest event called Unnatural Selection took place on September 2, 2015. A third tournament called The Last Stand took place on October 24, 2015. On December 28, 2015, a Charity event called Naughty or Nice was held in a 100 versus 100 SotF match.

Players can earn cosmetics for winning: