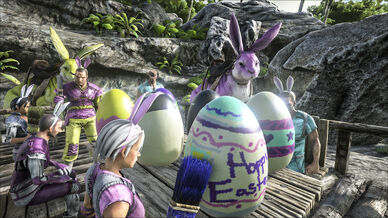 The event adds two new wild creatures to the game, the

Bunny Dodo and the

Bunny Oviraptor. Both behave the same as the normal

Oviraptor, but they are easily distinguishable as they are wearing Bunny Ears. Instead of normal eggs, they lay

The Bunny Eggs can be used to craft the following new skins at the Cooking Pot:

The event also features the DodoRex. It can be summoned at a Cooking Pot for 600 Bunny Eggs.