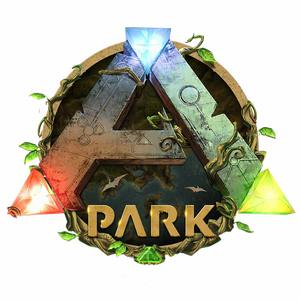 ARK Park is a virtual reality spin-off on ARK: Survival Evolved. Developed by Snail/Peacock Studio and creatively consulted by Studio Wildcard. Originally set to be released for PlayStation VR in December 2017,[2] it was postponed and has been released on PSVR together with HTC Vive and Oculus Rift on March 22, 2018.

ARK Park is a virtual reality multiplayer adventure game designed from the ground up to immerse players in a realistic dinosaur theme park. This interactive experience will fulfill your dreams of entering a world where living, breathing dinosaurs still roam the Earth. Freely explore this grand, virtual world where there's no set plot line or schedule. Join your friends in multiplayer park tours to share the thrill of witnessing over a hundred prehistoric creatures up close and personal.

ARK Park currently has 3 facility maps, 5 exploration maps and 6 battle level. Without a linear plot line, visitors can tour around the park as they like.

ARK Park features a real-time day and night cycle, with four different times of day represented - day, evening, night, and dawn. Keep in mind that the time of day affects local creatures and biomes, causing some to present themselves only at certain times.

A Rich Variety of Ancient

There are over 50 different ancient species in ARK Park. Players can interact, tame, or even fend them off. When exploring the wilderness, players can use a gene scanner to collect gene fragments from prehistoric creatures. These can be used to reveal detailed information about the creature(s) or even unlock blueprints for crafting.

Within the Forest Trail, players can fulfill their dream of having a pet dinosaur. Hatch Eggs at the incubator to acquire your own baby dinosaur!

Incubation: First one must obtain Eggs through various means, such as exploration or gifts. Once obtained, place the egg into the incubator to hatch it. Different types of eggs will require different times to hatch.

Taming: To ensure your baby dino grows up healthy, you must check up on them regularly. Use the control panel at the bottom right of the dinosaur's cage to check their growth status and satiation rate. They will continue to grow even when you are offline, so make sure they've been well fed!

Shuttle: Take the Crustal shuttle to experience an amazing ride across the park and ocean.

Jeep: Take a jeep ride through the perilous Sequoia Rainforest while enduring the chattering driver.

Dinosaur mount: After raising a dinosaur to a fully grown state, they will become ridable as a mount and take you on a wonderful trail excursion.

Within the Forest Trail is an integrated holographic crafting table. With this holographic device players can forge various items, including weapons. Why would you need a weapon at the park? You may soon find out...

Unlocking Blueprints: Unlock different blueprints using the gene fragments you have collected. Once a blueprint has been unlocked, you can craft the item using the holographic crafting table.

Crafting: Using the holographic crafting table, a holographic model of the item will be displayed along with the required material and the quantity. If the requirements are met, press the Craft button at the bottom right to begin crafting.

Throughout the park are towers called Brainwave Towers. These towers are used to inhibit the dinosaurs from viewing humans as a threat, or food. Occasionally these towers will break down and you may find yourself defending them from rampaging dinos.

This mode is split into levels. During a level, Dinos will attempt to attack the tower in waves. Defeat all the attacking dino waves to complete a level. Successfully completing a level will then unlock the next one. There are three difficulties available, each corresponding to a different time of day - day, dusk and night.[3]

Instead of bringing back the Boss Creatures Ark Park instead has Boss Variations of enemies such as a Giant Pulmonoscorpius Boss, a new Rex variant, and etc. (the only exception was the

Argentavis, Raptor, Rex, Sarco, Spinosaur, and Triceratops still have their own previous skin prior to TLC Pass 1, 2 and 3.

Megapithecus in ARK Park, having formed a more gorilla-like posture in favor of the upright human posture. However, there is a smaller variant of Megapithecus in one part of the defense.

It is possible to 'tame' a baby dino through birth. It should be noted however, that unlike the main game, the eggs appearance are different, the time of incubation too are different. Moreover, the dinos do not have their 'baby' appearance, but instead retain their adult appearance in a slightly larger look as a baby. Also, much like the main game, there is a possibility of gaining mutation from the said dino.

Along with TLC Pass 2 minor patch fix introduces the ability to export certain types of tamed dinos from ARK: Survival Evolved into ARK Park regardless if the dino is in Single Player, Multiplayer or on an Official Server, including Scorched Earth, Ragnarok and Aberration native dinos. According to the developers, currently only

Parasaurs can be imported into ARK Park.