Aberration is an Expansion Pack for ARK: Survival Evolved. It was released on December 12, 2017 for PC, Xbox One and PS4 at the initial price of $19.99 USD.[1] It is also available for purchase through the season pass.

Any creatures tamed and items received can be brought to the vanilla island and used by people with and without the expansion. Items from the DLC can also be spawned manually if you don't own the expansion pack.

All music was made by Gareth Coker.

Aberration places survivors on a damaged ARK: its internal atmosphere has leaked away, resulting in a harsh surface with intense radiation, and a plethora of lush biomes underground. With the maintenance systems of this ARK malfunctioning, the many hazards, creatures, and nature of the environment present a thrilling new world to explore and master.

The intense radiation of Aberration has led to incredible genetic mutations, resulting in new creatures with amazing abilities! Among others, clamber up walls & glide through the air on the back of a camouflaging chameleon-like ‘Rock Drake’, keep the dark at bay with a friendly ‘Bulbdog’, grab and toss multiple creatures simultaneously with a massive ‘Karkinos’, or—if you are talented enough to tame one—command the vile ‘Reaper’ by being impregnated with a horrifying reproductive chest-burster!

New tools are on-hand to survive on the world of Aberration, while opening up many possibilities for new competitive and cooperative scenarios. Traverse the ARK using

Gas Collectors, fortify your home within the caverns using

cliff structures, and much more!

Earthquakes, radiation exposure, gas leaks, and Element chambers are among the many hazards that survivors will learn to grapple with Aberration’s varied biomes, both aboveground and below the surface. But among the greatest challenges on this ruined ARK is the hierarchy of unrelenting

And in the deepest depths of Aberration, their terrifying — yet somehow familiar — master awaits… will YOU be among the survivors powerful enough to face him?

The map is the underground of a damaged ARK. Most of the features are related to underground, where new Resources exist, such as

Gems. Rather than being an island, the majority of the map is enclosed underground biomes, making it especially advisable to carry a

GPS to not get turned around in the dark twists and turns. Radiation seeps in at specific locations of the map, causing exposed players not wearing

Protective Gear to take damage over time. Other new strange effects are also a feature.

Oil is harder to get, since other than the

Seeker drops, the only other natural source of Oil is at the Surface or in the much more difficult area beyond The Spine. But It can be dropped by Tek Dinos.

Supply Crates only spawn on the surface, but unlike other maps, crates can still be found below the surface, outside of artifact caves, in the form of

A new and fairly vital resource to the game is the

Gem, which has three color types found in areas of varying difficulty.

Green Gems are found almost immediately upon spawning in the Portal and are found further on in the Fertile region.

Blue Gems are found within the Luminescent Biome.

Red Gems are found in the more difficult depths of Aberration, in The Spine, Lost Roads, and Element Falls regions.

Wood but from the larger mushrooms scattered around the underground. It substitutes for

Wood in recipes, but is explicitly required for making the new structure

Mushrooms appear around the map as a harvestable resource, similar to the bushes found for

Berries. However, be careful to avoid the Blue or Red mushrooms found across the map, as these are harvestable but dangerous. Blue mushrooms inflict instant Hypothermia. Red mushrooms inflict hallucination, which can be deadly: side effects other than colorful vision include uncontrollable direction change, constant defecation and its attendant increased hunger, and forgetfulness of breathing - better known as Suffocation, but it ignores Oxygen level of the player as it automatically registers as if the player has 0 Oxygen. Any of these side effects could kill unprepared players. These effects can also harm shoulder-mounted dinos, so be careful. However, eating the

Aquatic Mushroom provides temporary immunity to the Freezing Debuff or Luminous Poisons, and eating the

As the map is mainly underground, Earthquakes often happen which drop random items including

Crystal. They also randomly move sleeping survivors that are not anchored to their beds, and cause survivors using a zipline or climbing pick to fall.

There are also locations where

Element can be crafted, called Charge Nodes. These require resources to craft, and one of the main items needed is

Element Ore which is found on The Surface or in The Grave of the Lost.

Reaper, emerge with differing frequencies within areas of both the Bio luminescence and Element Regions, in the absence of Charged Light, including inside player-made structures. It is well-advised to keep sources of Charge Light around the base as regular light sources do not prevent them from emerging. Charge Light is usually best provided by the new creatures:

Another new creature, the

Ravager quickly becomes a survivor favourite as the melee animal of choice, as their damage rapidly stacks with their pack bonus.

Compared to their standard versions, Aberrant Creatures have 4% less health, deal 6% more damage and glow in the dark.

Aberrant Dimorphodon was previously thought to not spawn, but has now been found in some regions of the map.

Aberrant Araneo has been known to be sighted around Grave of the Lost and Rockwell Terminal, but much like Dimorphodon, are a rare sight.

Aberrant Megalania exist within game files, but has no spawn area as of current. This is due to a design choice in favor of Rock Drakes.[2]

Radiation is a new hazard introduced on Aberration that deals continuous damage to vulnerable targets that rapidly stacks-up, and cannot yet be cleansed. They are mainly found within Element Regions. The following Aberrant creatures are immune to radiation damage

Aberrant Megalania is immune, but it only exists in the game files without spawning naturally.

Most of the life indigenous to the Aberration ARK is also immune. However, the following native creatures are noteworthy for not being immune:

All imported creatures without the Aberrant mutation and all Aberrant Creatures not included in the above list of those immune, as well as Tek Creatures, are also vulnerable. The most notable radiation-vulnerable creatures are Aberrant Ankylosaurus and Aberrant Doedicurus, due to their high utility in mining. You will need to feed them Mushroom Brew every 120 seconds to keep them from suffering the effects of Radiation.

Only certain creatures can be downloaded on Aberration. This limitation can be disabled with the CrossARKAllowForeignDinoDownloads option. See CrossARK Transfers for more details and a full list.

All items from the base game are available on Aberration in addition to the items below. 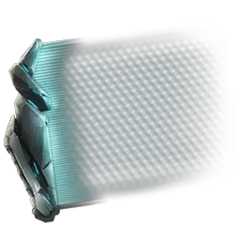 As Aberration is part of the story of the ARKs, 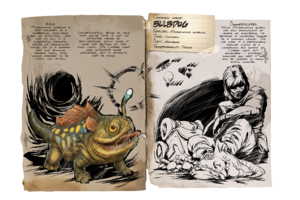 Dossiers can also be found on Aberration, written by Helena Walker to document the research of Aberration's creatures. For more in-depth information, see Dossiers.