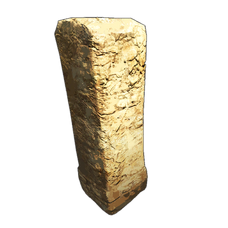 The Adobe Pillar is a Structure in the Scorched Earth-DLC of ARK: Survival Evolved.

A pillar is a stackable form of a foundation, which is used for building structures.

A pillar or series of pillars with the bottom touching the ground and a ceiling on top will function as a foundation, providing support and allowing structures to be built on top of it.

Pillars provides sufficient support to allow a structure built on top of it to extend up to 2 ceilings in any direction on the x and y-axis, and up to 1 ceiling diagonally, not counting the center ceiling. However, the ceilings on the far end will not support walls.

A diagram showing how a single pillar or foundation (✖) can support 13 ceilings (indicated in green). The edges marked in red will not be able to support a wall without additional support beneath.