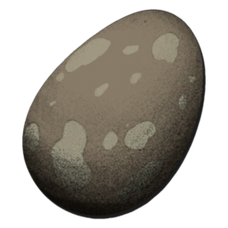 The Allosaurus Egg is one of the Eggs in ARK: Survival Evolved.

Allosaurus Eggs are randomly dropped by

Allosaurus. They can be eaten or used to make

Allosaurus mate, the resulting egg can be hatched into a baby

Allosaurus will cause them to become hostile and attack the survivor.

Allosaurus needs between 18h and 2d before having the capacity to lay eggs again. The incubation time can be reduced by up to 20% if the egg is placed in an

Can either be collected from wild Allosaurus or from tamed ones.

They are easier to find in the wild than other eggs due to their pack status so they are often mate boosted. However, stealing an egg will cause the mother to chase you relentlessly.

By taming a female, you can collect her eggs without her becoming aggressive. She will lay them more often if you have a male Allosaurus for the Mate Boost and an Oviraptor near by.

Carnivore Pheromone applied has laid one. They will hatch quicker than normal Allosaurus Eggs and the baby

Allosaurus will have better stats when it has hatched.

Super Kibble (Allosaurus Egg), which will