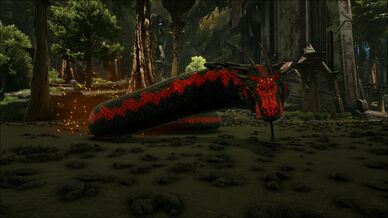 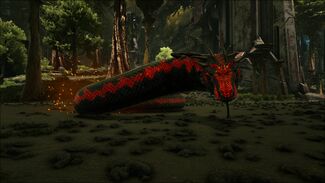 None
Drag Weight
425
Can Damage 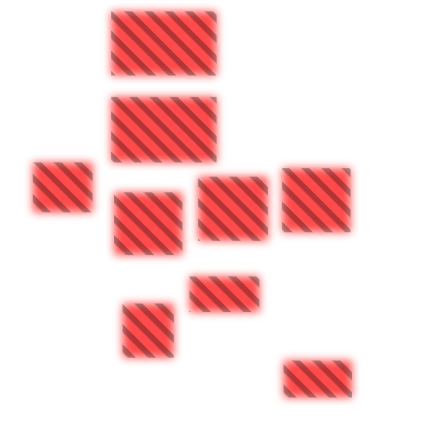 The Alpha Basilisk is one of the Alpha Creatures in ARK: Survival Evolved's Aberration expansion.

Much like their weaker counterpart, Alpha Basilisks are aggressive and will chase their prey to no end.

Alpha Basilisks resemble normal Basilisks, except that they glow red, are slightly larger, and are covered with a glowing red-orange cloud.

The Alpha Basilisk always spawns with the same color scheme and has no color regions.

This means it is currently impossible to make alterations to the Alpha Basilisk's colors.

If you find this creature in the wild, do not go near it. If you meet this creature it is best to have many heavy armored tames, and let them tank while you and your team unload upon it until death.

Use long-range weapons and creatures with large amounts of health to distract it. If you attempt to find a high place to shoot it from, odds are it will find its way up the surface or fire its poisonous projectiles at you.

Alpha Basilisks have a poison attack and are incredibly fast.

Alpha Basilisks cannot attack or burrow underwater. Lure it there and kill it with a

Rock Drake. Do not let it reach the shore!

Unlike normal Basilisks, Alpha Basilisks do not deal torpor damage.