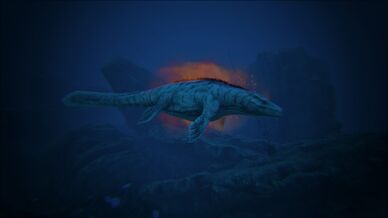 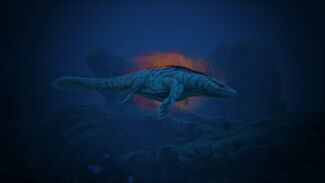 None
Drag Weight
899
Can Damage

The Alpha Mosasaur is one of the Alpha Creatures in ARK: Survival Evolved, and one of the four Alphas living in the waters around the island.

A low-level (1-20) Alpha Mosasaur is generally no match for a powerful tamed Mosasaur with a good saddle. Barring any surprises a player with such a mount can make short work of the Alpha. If Plesiosaurs are to be used, attack with a group, keep an eye on their health and be ready to pull up to heal. A herd of sharks will also work well due to their exceedingly powerful pack bonus and bleed.

A mid- to high-level Alpha (21+), on the other hand, may require considerable softening before even tamed Mosasaurs can bring it down and should not be attempted without either a very large school of high-level megalodons or a friend, as their health and damage rises quickly with levels, the highest-level Alphas will require considerably stronger fighters.

Low-level Alpha Mosasaurs require little strategy if you have a sufficiently powerful squadron or one very powerful tamed Mosasaur. Beware, though- like all Mosasaurs, Alphas have a very broad bite area and will likely be doing damage to several of your tames at once if you decide on a dogpile strategy. If you do not have powerful sea mounts, it's possible to whittle one down by luring it to a sea cave and taking refuge where it can't reach you, though this is dangerous as the Alpha will have to be repeatedly lured back to the cave when it loses interest.

A high level basilosaurus can repeatedly attack the mosasaur while surfacing for healing, though this is best done with two tribe members and mate boosted pairs with good saddles.

A manta is also useful for killing very low level alpha mosas due to its downward attack. Just swim above it and keep attacking, while rising towards the surface. Eventually, the alpha mosa can't rise any further, and you can attack it as it tries to descend without any fear of it fighting back. Rinse and repeat.

If opting for ranged weapons, the most powerful crossbows you have will still take years to kill it.

Like all Mosasaurs, the Alpha has a wide turning radius. However, due to their large HP and damage it is not advisable to try and exploit this to kite them as any latency at all may end in death. This is, however, useful in making an escape if you find your mount chewed out from under you. Alpha Mosasaurs cannot fit in caves, making these (theoretically) safe retreats. Its large body size can also be exploited, allowing very large crowds of tamed dinosaurs to get within melee range to kill it quickly.