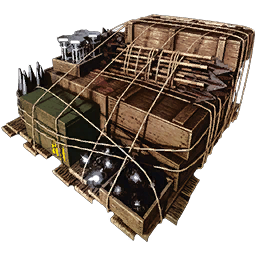 The Ammo Box is a Structure in Genesis: Part 2. It is able to store and distribute a variety of Ammunition across certain Emplacements and Weapons. As long as it is supplied, the Ammo Box will ensure that all Emplacements in it's radius do not run out of ammunition. It has 300 slots and can only hold ammunition. There can only be 2 Ammo Boxes per 9.5 foundations. You can refill a weapon by holding it out and pressing E on a filled Ammo Box. It has a range of 9.5 Foundations and any

Rocket Turrets can keep firing until the Ammo box runs out of ammo.

Tek Turrets will try and refill every minute when not shooting and every 30 minutes after shooting. When a turret is refilled it will glow purple and get a blue particle ring around it for a second.