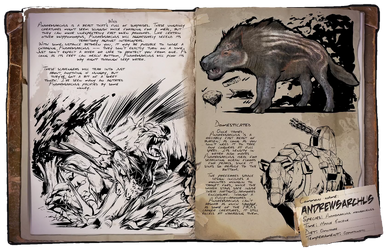 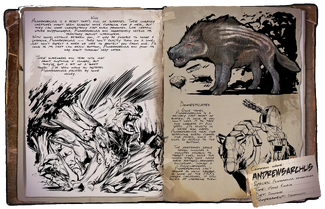 The Andrewsarchus is a Creature in ARK: Survival Evolved's Fjordur DLC.

Andrewsarchus is a beast that's full of surprises. These ungainly creatures might seem sluggish while foraging for a meal, but they can move unexpectedly fast when provoked. Like certain other whippomorphs, Andrewsarchus will aggressively defend its territory against interlopers. With some distance between you, it may be possible to dodge a charging Andrewsarchus -- they don't exactly turn on a dime. Just don't expect a river or lake to protect you from one. As long as its feet can reach bottom, Andrewsarchus will plow its way right through deep water. These scavengers will tear into just about anything if hungry, but they've got a bit of a sweet tooth. I've seen many an agitated Andrewsarchus pacified by some honey.

Once tamed, Andrewsarchus is a reliably fast beast of burden, as long as you don't need it to take any corners at full speed. Its density in water also makes Andrewsarchus ideal for searching ocean floors for pearls, since it sinks so readily to the bottom. The preferred saddle design includes a mounted minigun to target foes, while the driver stays safe inside their airtight armored enclosure. Though a fully-armored Andrewsarchus can't absorb as much damage as some of the ARK's larger creatures, it still excels at harassing them.

Barely anything is actually known about how this creature is going to behave, but the dossier implies that it will attack wild creatures and players on sight.

The Andrewsarchus's information is currently unknown, because it is unreleased and not yet in the game.

This section describes how to fight against the Andrewsarchus.

It is unknown how the Andrewsarchus will be tamed, but the dossier says that "it has a bit of a sweet tooth" implying that it may be passively tamed with honey.

The spotlight trailer for this creature implies that when tamed the Andrewsarchus will be a fast creature, though not a very maneuverable one, probably similar to the Roll Rat or Woolly Rhino. It will have the ability to drift during a full on sprint (probably after filling a speed or power bar similar to the Woolly Rhino's charge mechanic) and riders will be able to use the minigun while sprinting or drifting.

As for the turret itself, it is unknown if damage scales with the saddle quality similar to the Tropeognathus' jet and cannon saddle.

Its primary utility besides the saddle-mounted minigun is as yet unknown. It is also unknown if the minigun saddle is the only saddle available, or if the Andrewsarchus can even be ridden without a saddle. One thing that it would appear to do is an alt attack where it kicks at whatever is behind it, likely with significant knockback.