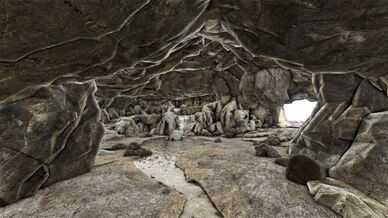 The Arch Cave is a cave system in the Southwest.

This cave is sufficiently large for a base of even a large tribe. It is relatively well hidden despite having five entrances of which two are platforms which can be extended to be hangar entries in the cliff side wall. Those two entries are also the most prominent sign of the cave. They can be seen from the beach, water falls dropping from them and it is possible to reach them on foot by dropping down from the hill slope which leads up the cliff. There are two land entries to the east very close to each other and one large land entry to the west. All are relatively well hidden.

The extensive inside of the cave is separated into two areas. The lower one connected to the west entry and one of the east entries. The higher one accessible through the cliff side entries and the smaller one of the east entries. Unless a stair or ladder is build, it is not possible to reach the upper level from the lower one by foot. There are also higher platforms towards the west and east entries, effectively turning the cave into a "natural" fortress with the right emplacements made.

This cave has no creature spawns within the cave. But Wyvern tend to circle around the cliff side - hangar type - entries and might sometimes enter the cave, until the entries are properly secured. Due to the immediate vicinity of the Wyvern Cave (Ragnarok) there will always be plenty of them around, effectively dispelling many players. There also seems to be an increased spawn rate of predators like Hyaenodon, Sabertooth and Utahraptor around the land entries.

Having to defend three sides, the sheer size of the cave and the multiple potential lines of defense require a lot of investments to implement this cave base fully. Also, since installations within a cave take multiple damage, it would be advisable to build bastions outside of the cave entries, as soon as secrecy is no longer the priority.

This cave also has plenty of water, offering farming possibilities inside the cave and there also is an internal small waterfall as the visual attraction of the case.