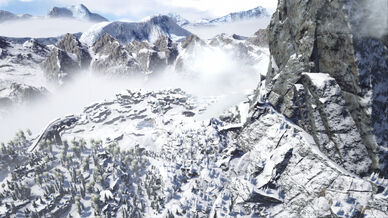 The Arctic is a region in the Genesis: Part 1 DLC.

A large frigid landscape with snowstorms and avalanches. The third hardest biome in the Genesis Simulation to survive in. Home to the elusive

Ferox and the endless snowstorms in the east. If one were to choose to live here, they should look for a cliffside to build above, and most importantly build a fence around their structure or hut and tames.

Despite the freezing temperature, this biome can be an easier start than the bog, as the difficult creatures in the artic are generally more visible and easier to avoid, and don't stun/dismount the player.

Water can be a challenge in this game early on. The only open sources of water are in non-buildable areas. Water can be collected during snow storms as though it were raining, filling the player's water but also reservoirs and canteens.

The x-otters around the Ice Fishing mission can be tamed easily by starting the mission and just not doing the mission but instead killing the fish that are spawned in and taming the otters. Most the creatures here are non-aggressive, so getting here early on can make the biome much more survivable since otters insulate the player when worn as a shoulder pet.