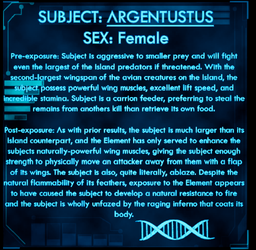 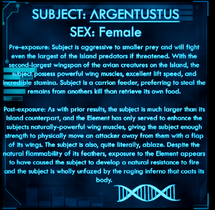 Wood
Habitat
The Argentustus Arena, accessible through the Boss Teleporter in certain Dungeons.

The Argentustus is one of the bosses in ARK: Survival Evolved Mobile.

It is extremely aggressive and will begin to fly towards the player almost immediately upon entering the arena. Unlike other creatures, it will not flee when its health is low, and will instead fight until it is dead.

The Argentustus has an enormous wingspan, far dwarfing that of an Argentavis or even a Quetzal. Its feathers are red and fiery and a fire burns on its head.

The Argentustus always spawns with the same color scheme and has no color regions.

This means it is currently impossible to make alterations to the Argentustus's colors.

This section describes how to fight against the Argentustus.

When you enter the arena make your way the the far left island. This position is important because the island has a small hill which can be used to stop the player from flying into the lava. Try to keep yourself directly in between the hill and the boss. If the boss uses its gust attack while above land, you can run right up against its legs to avoid the attack. Focus on dealing damage and keeping your position.

An assault rifle, tek rifle or a high damage pump action shotgun is the best option. Maybe also a compound bow with at least 500 damage (Aim for head as the boss has a headshot multiplier)

The biggest danger in this fight is being knocked into the lava. The lava is an instant kill for even the strongest survivors. The argentustus will randomly use its "gust" attack, which knocks the player back. This knockback is substantial and can push you off your island and into the lava. This is your biggest threat.

It has a large turning radius and is not that fast, so try to take advantage of that.