This article is about Ascension as a game mechanic. For the cave you have to complete in order to ascend, see Tek Cave.
Ascension 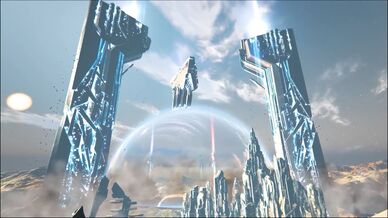 Ascension is the process of beating the last boss in ARK and ascending to the next level.

Ascension involves beating all the bosses of an official story ARK (excluding Scorched Earth), and discovering the true nature of the ARK. After a Survivor has beaten the

Overseer, 5, 10, or 15 maximum Levels depending on what difficulty one ascended off on, or one could go to another server and follow the way the story portrays.

Additionally, Survivors are able to ascend on the following:

This allows Survivors to be able to reach a maximum level of 170 (A further 10 can be obtained by reading every survivor note, and another 10 from finding every rune on Fjordur).

The Tek Cave, located in the Volcano, is the final cave of the game and completing it and defeating the Overseer Boss will allow the player to undergo ascension. To access the cave, you need the Broodmother, Megapithecus and Dragon trophies of the appropriate rank, which in turn require you to have already acquired all the artifacts (or fought the bosses with somebody who did). Ascensions above Gamma require you to also have the special drops from Alpha Creatures.

Upon defeating Overseer, the survivor's Specimen Implant will change into their respective type after returning to Island, along with the additional prefix "(Difficulty) Ascension". This is also shown whenever any inventory is accessed.

With the introduction of Aberration, up to 15 additional levels can be gained for defeating Rockwell depending on its difficulty, located below the Grave of the Lost in its terminal (or in multiplayer servers at any of the damaged obelisk at surface as well as loot crates). To access the Arena, you need the three Artifacts (Artifact of the Depths, Artifact of the Shadows and Artifact of the Stalker). Ascensions at Beta requires specific drops, and ascensions at Alpha require you to also have the three special drops from Alpha Creatures.

Upon defeating Rockwell, the survivor's Specimen Implant will be mutated with their respective color icons depending on the difficulty (Green for Gamma, blue for Beta, and orange for Alpha) at upper-left corner of the implant, along with the additional prefix "(Difficulty) Aberrant" (If Tek Cave Ascension is completed, the text will appear at the right after the comma). The Aberrant light glow on the implant will show its respective pattern as well.

With Extinction being accessible through the Aberration Ascension, the plot thickens. To be able to access and defeat the

King Titan, you have to find its terminal located at the Forbidden Zone. Unlike the other Bosses and like Overseer, the three Trophies of the Titans along with other drops are required. While there is no level requirement to activate the fight, it is recommended that one comes prepared, especially as the zone containing the terminal is teeming with

Specimen Implant is permanently removed, and in place,

Homo Deus Record takes over the slot. Unlike previous Ascensions, the item remains the same regardless of the difficulty you faced, with only difference being the record labeled as "Gamma", "Beta" or "Alpha" based on the difficulty of the

King Titan that was defeated. Unlike the other version, this does not give any additional level. However, if you don't stay in the area, the ascension won't apply.

With Genesis: Part 1 being accessible through VR, more levels can be added in the survivor. To access the boss battle against the Corrupted Master Controller, you have to interact with HLN-A to pick "The Final Test". Unlike the other Bosses, the survivor initiating the battle must have cleared enough missions for its relevant difficulty.

Upon defeating the Master Controller, the survivor's Specimen Implant will have an additional attachment on their implant based on the difficulty at the upper-right hand corner of the implant, without any prefix and, like previous ascensions, will add in additional levels. However, if King Titan was already killed with the survivor, it will not show up, as Homo-Deus Record will be in the Implant place instead.

With Genesis: Part 2 accessible inside the corrupted insides of Genesis Ship, more levels can be added in the survivor. To access the boss battle against Rockwell in his prime state, you have to reach the mission terminal found below the heart inside the Void.

Upon defeating Rockwell Prime, the survivor's Specimen Implant will have a summoning icon below in the inventory with no additional prefixes. This does not show up on their arm, regardless whether or not they have already killed King Titan. Like other ascensions however, this adds in additional level.

There are 3 achievements to be unlocked by ascending on The Island, awarding skins and hairstyles in addition to a higher level cap.

A code can be seen during ascension, it can be decoded here. Input the ARK code in the input field below. Use the letters according to the following principle. Characters other than w, a, s, d or space are ignored.