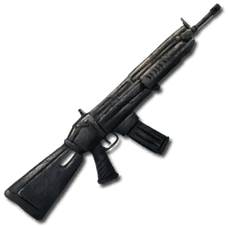 Advanced Rifle Bullet at once.

Assault Rifles sport an extremely high firerate, dealing almost the same amount of damage per shot of a

Fabricated Pistol but twice as fast. In continuous fire, only a

Pump-Action Shotgun at point-blank range is capable of beating its DPS capability, but if combined with

Shadow Steak Saute, the Assault Rifle will easily allow its user to cover ranges greater than Pump-Actions can. Coupled with its excellent durability, it's possible to dish enormous amounts of damage at short time intervals. However, the high firerate quickly shows how expensive (and if carried in the large quantities needed to wreak havoc, heavy) its ammunition is, and the lower burst damage than a

Fabricated Sniper Rifle of similar stats make fire and cover tactics an unwise use of this weapon.

It can be crafted at level 58 using a

Fabricator. It can have any attachments put on except the scope, but like all guns in ARK, it can only have one at a time.