This article is about Astrodelphis, not to be confused with 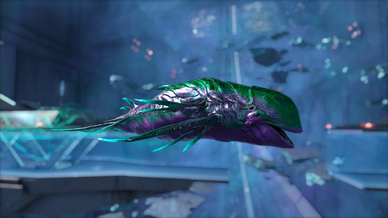 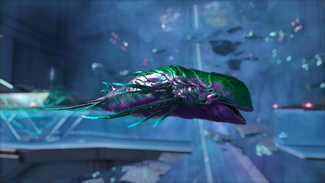 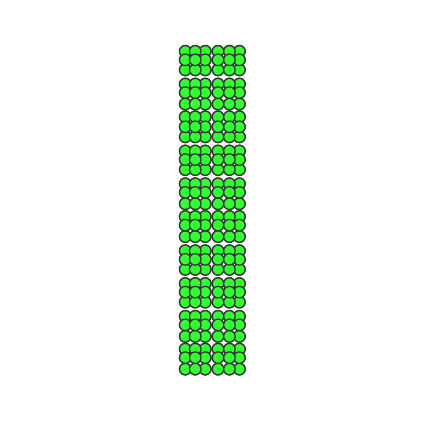 The Astrodelphis or The Space Dolphin is a creature in Genesis: Part 2.

The Astrodelphis is similar to the

Ichthyosaurus, they are a very curious species, and will often "swim" towards you and around you out of curiosity. However, if it gets too close, it will repeatedly bite at you. Unlike the ichthyosaurus it will fight back with full force if attacked.

The Astrodelphis is an extraterrestrial creature that resembles an alien mix between a beluga whale and an orca, just sporting large iridescent scales, glowing appendages, four eyes, and a trail of astral energy.

This section displays the Astrodelphis's natural colors and regions. For demonstration, the regions below are colored red over an albino Astrodelphis. The colored squares shown underneath each region's description are the colors that the Astrodelphis will randomly spawn with to provide an overall range of its natural color scheme. Hover your cursor over a color to display its name and ID.

This section describes how to fight against the Astrodelphis.

The Astrodelphis is a curious Creature. When approached by a Survivor, they will confront and headbutt them, doing little damage but considerable knockback. When attacked, any nearby Astrodelphis will become hostile, chasing the Survivor down and killing them with considerably more power.

The Astrodelphis is a glass cannon, being rather fragile yet capable of heavy damage. Keeping your range and kiting it with weaponry is best, but a powerful mount can also dispatch them with utmost haste.

Ranged weapons such as the Pump-Action Shotgun or Longneck Rifle eliminate some of the risk of the Astrodelphis hitting the player.

Astrodelphis functions similarly to Triceratops or Stegosaurus when attacked, as in every Astrodelphis in the area will attack the survivor. This can be noted by the reddish energy they will spout from their blowhole, followed by constant noises while chasing the player. They are also quite fast and will outrun slower players, though a player using the Federation Tek Suit can still outrun wild ones.

They don't have a lot of health and can be dispatched by powerful weapons like the Pump-Action Shotgun or Longneck Rifle relatively quickly.

Astrodelphis are tamed non-violently, rather than through the usual methods.

Being a cordial and curious creature, it will slowly approach any survivor that is within radius. To tame it, you need to pet the creature twice, then feed it with

Element. Be wary though, as it will try to flee or attack after the first pet. (Note that its attack while non-hostile is more like a "friendly" headbutt which will do 1 damage but considerably knock you back.) In addition, any other Astrodelphis that is nearby may become hostile towards the player upon a feed.

Each feed reduces its taming efficiency. To achieve the highest efficiency, one must feed and pet it in tandem. The faster you react to the creature, the more the taming percentage covers, but the more element you will need to feed it. If it for some reason decided to either stop aggro or flee on you, the momentum of taming resets back to 1 element.

The Astrodelphis Starwing Saddle comes equipped with thrusters, allowing it to shift between modes of flight, as well as laser cannons that instantly hit targets in front of it. The saddle also fires homing energy blasts when holding Lmb,

and is fired upon release. If grenades are in the Astrodelphis's inventory, Rmb,

fires a explosive shell that explodes when the attack is used again, upon hitting a target, or after a certain distance. When underwater holding X (PS4) or A (Xbox) will do a sonar that reveals nearby creatures. When killing a creature It'll drop a glowing buff which can be flown into to gain a buff that gives bonus damage, damage resistance and movement speed for 60 seconds. Get another buff during the duration you'll get the max version of the buff for 40 seconds. After 40 seconds it'll go back to the weaker version of the buff, but acquiring another buff will refresh the timer. The saddle is capable of also doing a barrel roll movement that can do a quick burst of damage if your astrodelphis is right next to it. Increasing melee damage can increase damage of the barrel roll attack.