This article is about Auto Turret, not to be confused with 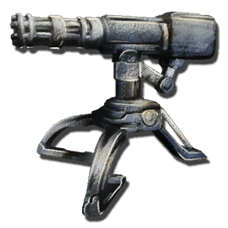 The Auto Turret is a fully automatic turret which can automatically target and fire on enemy dinos, players, both, or all (which includes wild dinos) within its range, as well as

Grenade and the Magmasaur's searing spit. The fact that the turret does not need any guidance makes it an invaluable resource to defend against raiding, whilst your tribe is offline. This turret uses

Plant Species X is an organic version of the Auto Turret and provides similar value.

The Auto Turret has multiple range settings, which correspond to the following distances:

There are six targeting settings. (All of these settings ignore survivors and tamed creatures belonging to your tribe and alliances.)

The Auto Turret is not currently paint-able, however this object may be re-mapped to include paint regions in a future update.

As of 242.0, the Auto Turret can no longer be built on Quetzal, Brontosaurus, Mosasaurus, Plesiosaur, or Paracer platform saddles. Any existing turrets on such platforms will no longer fire. This is a server option of "OverrideStructurePlatformPrevention=true". Otherwise they're now only allowed on Rafts and non-moving Bases.

There is also a limit of 100 turrets that can be placed within a 10000 UE-unit (~33.3 foundations) radius. This applies to the combined total of all Auto Turrets,

On ARK: Survival Evolved Mobile, the

Plant Species X have a limit of 10 combined within a 16 foundation radius.