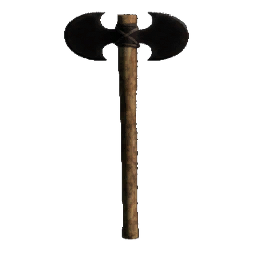 The BattleAxe is a Weapon in the Primitive+-DLC of ARK: Survival Evolved.

Extremely effective on thatch, wood, and stone structures. Combined with its high melee it is extremely useful against other players and creatures, it has the highest melee of all melee weapons in primitive plus, it is also fairly easy to craft, however it requires crystal to get the leather for the weapon. Making it more of a midgame weapon to some players, it is also claimed by some to have a higher range than its easier counterpart, the